As we highlighted the year's big stories, it goes without saying that weather would probably be in the top five events or issues that we thought shaped the year that was.

That we chose weather as THE story for 2022, however, was not just because of the influence it had over the country this past year. Its top billing was mostly due to its long-living condition: 2022 marked three consecutive years when a La Nina condition shaped our weather patterns throughout the growing season.

The full story on 2022's weather influences is here:

https://www.dtnpf.com/… or in our Top Stories segment for DTN subscribers.

In his look back, DTN Ag Meteorologist John Baranick walks us through the issues this somewhat rare situation created, in the United States and elsewhere. The back story to all that, however, is how this weather condition, three years running, began to take a toll that led to so many other issues across the country, and will continue to play a role even as weather patterns move into more neutral -- neither La Nina nor El Nino -- conditions as Baranick predicts for 2023.

Baranick was quick to put perspective on this rare three-year phenomenon, correcting me when I exclaimed on the rarity as I wasn't sure I'd seen three in my 60-plus years.

"It's rare, but it's certainly not unheard of," Baranick said. "These seem to be happening about every 20 years or so," a fact that gave DTN weather experts the confidence to predict 2022 would continue to see a La Nina pattern way back at the end of 2021.

In the graphic that accompanies this piece, Baranick highlights the triple-hits of the mid 1970s, 1990s and the 2020-22 periods. One of the things DTN has always brought to its customers is that historical perspective, and the analysis of what those weather events mean in farming and ranching terms.

The long-term effects of continued La Nina conditions are hard to miss. U.S. grain supplies, particularly soybeans, struggled to stay up with demand, keeping a firm support on prices. While the western U.S. got some moisture reprieve, fires, dry soils and low hay and forage supplies continue to plague our farmers west of the Mississippi. The farther west, the worse things were.

Those hot, dry conditions set up one of the saddest stories we've had to tell in a while, the deaths of more than 10,000 cattle in west-central Kansas due to multiple days of 100-degree heat, high humidity, little night-time cooling and no wind. Animals simply overheated, succumbing to the constant stress.

Progressive Farmer Senior Editor Victoria Myers broke the story and dug into the unusual conditions that created it in her June story, which can be found here: https://www.dtnpf.com/…

If you attended our the DTN Virtual Ag Summit in early December, you heard Baranick's latest outlook for rest of winter and the beginning of the 2023 season. The good news is the chance of a fourth La Nina in a row is very low. More "neutral" conditions, not a La Nina, nor the El Nino patterns that can bring more precipitation to the Corn Belt than we can often use, should bring some level of normalcy to spring and summer. But many areas will continue to be plagued by the lack of soil moisture thanks to our long La Nina courtship.

We can only hope for something other than weather to top our Top 10 list for the coming year.

If you missed any of our Top 10 stories from 2022, our complete list is here:

To see some of our coverage of La Nina throughout the year, see:

-- "Break in the La Nina Dryness for Argentina, Brazil," https://www.dtnpf.com/…

-- "Here's Why Winds Have Been So Strong: La Nina and Friends," https://www.dtnpf.com/…

-- "Central Plains Were Record-Dry in August ... With Some Thanks Going to La Nina," https://www.dtnpf.com/… 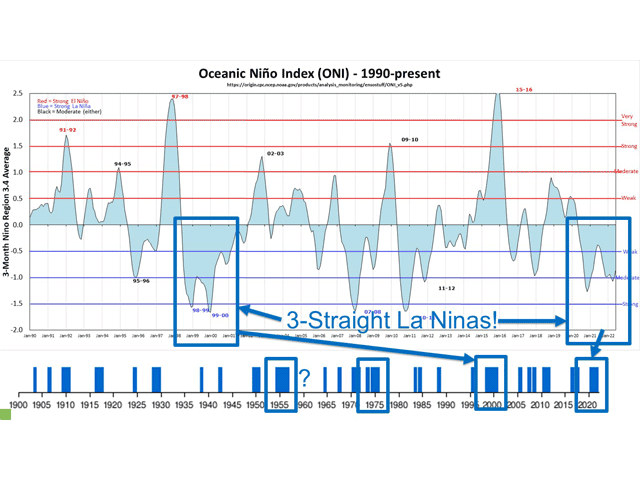