Each year, DTN publishes our choices for the top 10 ag news stories of the year, as selected by DTN analysts, editors, and reporters. This year, we've counted them down from Dec. 19 to Dec. 30. On Jan. 1, we will list some of the runners-up for this year. Today, we come to the top story of the year. At No. 1: La Nina was a steady driver of weather across the United States and had a large impact on crops, as well as livestock. Increasing drought in the Plains spread to most of the country at some point during the season. Variable precipitation generally meant lowers yields and tough livestock conditions for many areas. And the U.S. wasn't the only country affected by La Nina.

MINNEAPOLIS (DTN) -- La Nina never gave up its control over the entire course of 2022. While La Nina developed in late 2020 and persisted into early 2021, neutral conditions took over during the summer. But when it returned in late 2021, the episode never relinquished its grip on the Pacific Ocean or its driving force for U.S. weather in 2022. From early flooding and cold that delayed planting, to heat and drought that caused variable yields and livestock losses, La Nina brought plenty of weather challenges -- and earned the spot of the top ag story of the year, as selected by DTN.

In winter, La Nina favors clipper systems. These storms frequently moved through the northern U.S. and Canada in early 2022. Several of these systems dove farther south and brought cold, arctic air through large sections of the country, but there were relatively few cold air outbreaks that lasted for more than just a couple of consecutive days unless you lived in the Northern Plains or Canadian Prairies. (https://www.dtnpf.com/…)

Through the spring, La Nina favored a few deeper storm systems. Two such storms produced significant blizzards in April for the Northern Plains and eastern Canadian Prairies, burying them in feet of heavy, wet snow, leaving the region very wet and planting significantly delayed through May. (https://www.dtnpf.com/…) Other areas of the Corn Belt were wet as well during the active pattern, and planting was delayed in many areas, especially the Eastern Corn Belt. (https://www.dtnpf.com/…)

But the Central and Southern Plains did not benefit from the pattern, as it stayed much drier when the pattern should have been more active. A few significant storms went through with some rain and severe weather, but overall, the heat and dryness grew and significantly hurt the hard red winter wheat crop. Kansas, the leading wheat-producing state in the country, was hit the hardest, as the wheat tour confirmed. (https://www.dtnpf.com/…)

The cold across the north also stuck around during the late spring, and late frosts were being observed well into May.

In late May through most of July, the typical La Nina summertime pattern hit, and it hit hard. A large ridge of high pressure brought widespread heat to much of North America during these several weeks, hitting triple digits not only in the Southern Plains, where it is most typical, but also up into large portions of the Midwest and into the Northern Plains. At the same time, dryness took over a lot of the country, and drought grew through areas of the Southeast and Midwest and farther north in the Plains as well. Crop yields understandably took a hit, but did so unevenly, even within individual states. (https://www.dtnpf.com/… and https://www.dtnpf.com/…) Livestock producers also had a tough time with the heat and drought, causing major problems trying to keep cattle alive. (https://www.dtnpf.com/…)

The La Nina pattern did favor better rainfall in the Southwest, and the annual monsoon showers were more active this year than in previous years. Drought steadily decreased in the region, but streamflow seemed unaffected for quite some time. The Colorado River dealt with historic declines in water levels, and Lake Mead revealed some significant items that were otherwise buried underwater. (https://www.dtnpf.com/…)

Some eventual cool shots and episodes of rain moved through the Corn Belt in August and September, but for most of this year's crop, it was too late or came in sporadic fashion. Irregular rains led to widespread variability in crop yields not only between states, but within states, and even some counties.

Drought spread over much of the country during the fall and, according to the U.S. Drought Monitor, was historically bad. (https://www.dtnpf.com/…)

The increasing dryness led to more issues with river flows across the country and eventually came to a head in October as historically low water levels affected barge transportation on the Lower Mississippi River. River levels bounced around through November but stayed low until the pattern became much more active. (https://www.dtnpf.com/…)

While La Nina took a bit of a break in late fall, perhaps gearing up for a clipper-filled winter season, several systems were able to move through the U.S. and provide some easement in the widespread drought across the country, especially right in the middle from eastern Texas up into Wisconsin.

Drought here is now minor as we head into winter, and a stark turnaround from the summer heat. But it remains across large portions of the country, including the western Plains where hard red winter wheat went into dust during the fall. Crop conditions reported by USDA were at their lowest good-to-excellent ratings on record for this time of year. Cold weather that came in November promptly shut down the crop and is heading into the 2023 season with a poor outlook. (https://www.dtnpf.com/…)

La Nina's impacts were not limited to the U.S. either. Crop production was limited throughout most areas of the world, including heat and dryness in Argentina and southern Brazil, and significant heatwaves in India in the spring and Europe and China during the summer. The only large agricultural areas to receive beneficial weather were in central Brazil, the war-ravaged Black Sea region, and across Australia, which is trending toward a record wheat crop.

Other stories related to La Nina this year included:

-- "Break in the La Nina Dryness for Argentina, Brazil,"

-- "Here's Why Winds Have Been So Strong: La Nina and Friends," https://www.dtnpf.com/…

-- "Central Plains Were Record-Dry in August ... With Some Thanks Going to La Nina," https://www.dtnpf.com/…

No. 5: "Soy Crush Plants Give Long-Term Support to Bean Markets," 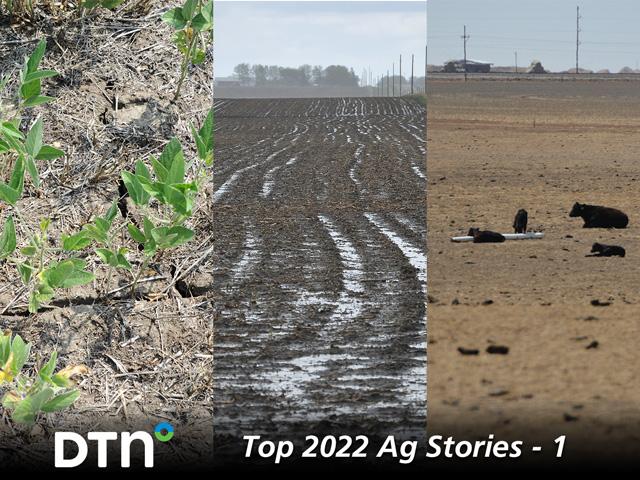