La Nina is at it again -- a third-straight South American spring-summer pattern of below-normal sea surface temperatures in the equatorial Pacific Ocean is going to do its best to ruin agricultural prospects in both Brazil and Argentina.

La Nina tends to lead to a shortened wet season for central Brazil, and hot and dry conditions in southern Brazil and Argentina. Neither are good for corn and soybean production in either country.

In the 2020-21 season, the first La Nina year in the series, a significantly delayed start to the wet season and three rounds of frosts and freezes in Brazil ended in disaster for the second-season (safrinha) corn. Dryness in Argentina affected both corn and soybeans. In the 2021-22 season, extreme dryness in southern Brazil and Argentina hurt the soybean crop and was followed by the exact opposite in Central Brazil to negatively affect safrinha corn yields.

So, what will happen in the third La Nina year?

I would expect trouble in some form, likely limiting soybean production in southern Brazil and Argentina, and corn production for both countries to some degree. But every La Nina is different and effects will not be completely predictable beforehand. So, the most important aspect to start with is the spring planting season.

In Brazil, first-crop soybeans cannot be planted before Sept. 10 or 15 depending on the location in the country. Most areas await the start of the wet season, which occurs with the first inch of rainfall in central Brazil around Sept. 26. Full-season corn planting can occur at anytime, but only accounts for about 25% of total corn production in the country and occurs more in the southern states where soil moisture is already very good. Early planting there is going well so far.

La Nina typically has an effect on the start of the wet season, which is to delay it by about a week. That was taken to about two weeks in 2020, but the event started right on time in 2021. The long-range version of the European model has increased precipitation in late September into early October, signaling a normal start to the wet season. However, the American counterpart does not see that increased precipitation at the same time, holding off until early October. There maybe some discrepancy in the start time but the effect is not too dramatic.

There is also a difference in the two models for precipitation amounts in the southern portions of the country, from Parana to Rio Grande do Sul. Again, the European model is wetter with more precipitation, while the American GEFS is much drier as we would expect with La Nina conditions. As mentioned, soil moisture is already very good in this part of the country. However, higher expected temperature forecasts from both models suggest that if precipitation is too light, the current good soil moisture may not last.

In Argentina, corn is planted in two phases. With an extremely long growing season that is mostly too short to double-crop anything but wheat with soybeans, corn plantings can be spread out between early spring (September and October) and early summer (December and January). Doing so helps to mitigate risks from one season being too dry and ruining the entire crop.

Conditions so far have been up-and-down, but generally lower than average. Temperatures on average are likely to be higher than normal for most of the growing areas throughout the spring, but northern zones may be a little closer to normal.

For both zones, both the American and European models are pointing toward below-normal precipitation. With soil moisture already low from last year's drought and a near-to-below winter pattern, soil moisture may be a more limiting factor for planting during the early phase. More producers may hold off to plant in the later phase, like they did the last two La Nina seasons.

Soybeans in Argentina are usually planted later, in late October to December, meaning there is much time to go before concerns arise from planting. The larger concern there is for those that double-crop wheat with soybeans. Cold conditions during the winter and now going into September have limited development of the wheat, pushing back planting dates for soybeans further back into summer.

La Nina conditions may continue into the summer season, but forecasts point to more neutral conditions by the end of summer and into fall. That gives a more uncertain outlook for safrinha corn. A crop we will need to pay close attention to for global supplies.

John Baranick can be john.baranick@dtn.com 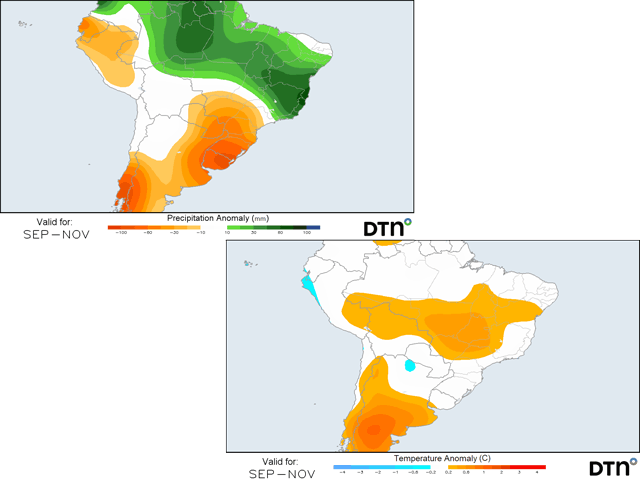