La Nina-fueled drought in the Central Plains continues to drag crop yield prospects down. USDA's Sept. 13 weekly weather and crop bulletin notes: "Although less than one-fifth of the U.S. corn (19%) and soybeans (13%) were rated in very poor to poor condition on Aug. 28, values were considerably higher in hotter, drier areas west of the Mississippi River. In Nebraska, for example, 34% of the corn and 28% of the soybeans were rated very poor to poor in late August."

Central and western Nebraska did not even receive a half-inch rainfall total for the entire month of August. In Kansas, the north, south-central and all western crop reporting districts had August rainfall totals which were among the 10 driest Augusts on record.

Corn and soybean yield prospects have been pulled down by this drought and accompanying heat; but crop prospects for more heat and dryness-tolerant crops such as sorghum and cotton have been affected as well. At the end of August, 44% of the total U.S. sorghum crop and 36% of the total U.S. cotton crop were rated in poor or very poor condition. U.S. sorghum production is now expected to drop by 44% (196 million bushels) from last year. Yield at an expected 46 bushels per acre (bpa) is the lowest since 1974 -- almost 50 years. This is significant because sorghum is known as a drought-tolerant crop and capable of producing in harsh conditions; yet even this hardy crop has been hit by drought and heat in 2022. The drop in sorghum production means fewer bushels available for feed in the Plains livestock areas -- which, along with lower corn and wheat production due to drought, is estimated by DTN premium service AgResource to total more than 800 million bushels (mb) less than last year's combined production in Colorado, Kansas, Nebraska, Oklahoma, South Dakota and Texas.

As for La Nina, the cool-water event in the equatorial Pacific Ocean continues to be in effect. The International Research Institute on Climate and Society (IRI) noted in an update "... the equatorial sea surface temperatures (SSTs) in the central-eastern tropical Pacific Ocean remained cooler than normal and were consistent with weak La Nina conditions (NINO3.4 index value in August 2022 was -0.96)." The Australia Southern Oscillation Index (SOI) on Friday, Sept. 16 had a 30-day running average of plus 10.98, which is an indicator of a weak La Nina. The SOI 90-day value was plus 11.13, with a daily reading of plus 20.98. These numbers give further indication of La Nina continuing.

The ongoing La Nina presence suggests fall rains will be precious and hard to come by in the Central and Southern Plains. Forecasts in the next week offer some moisture, but not significant amounts and not enough to make up for the production loss and historic dryness of the summer of 2022.

Previous Post (Central Plains Were Record-Dry in August... With Some Thanks Going to La Nina)
Next Post (Weather Continues to be Favorable for Harvest) 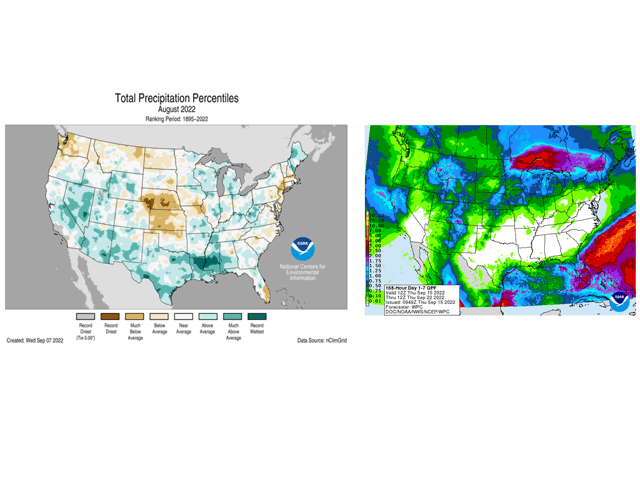