Looking at the stories that made our Top 10, there are of course the usual subjects that influence agriculture: weather issues, market surprises, a major ag policy change or two. Of course, COVID-19 and the economic and supply chain issues that it exacerbated are high on the list. Fertilizer prices alone are one of the most talked about issues around the coffee table, watering hole, or Twitter feed. So, a discussion around that deserved an article to itself, we felt.

One of the somewhat surprise subjects, though it likely should not have been, is that 2021 was the year cybercrime came to agriculture. Our Victoria Myers, who revisited the subject in our No. 10 story, kicking off the series, had already been working on a story on that subject for Progressive Farmer Magazine when many of the ag retail and related businesses began to be hit this past summer.

As Myers noted in her recap piece, "As our first article was wrapping up in 2021, it was almost daily news that this agricultural target or that supplier had been shut down due to malware attacks."

Concern for cybercrime hasn't lessened, according to attendance to breakout sessions on cybercrime at the DTN Ag Summit in early December. It will be interesting to see where that story line goes in 2022.

The issue we deemed the biggest story in agriculture this year -- the supply chain fiasco -- was actually a big part of many of the other stories we highlighted. It influenced grain markets, played a big role in skyrocketing fertilizer prices, hurt equipment repairs, and generally put a wrench in the global economy. The images of ocean freighters piled up in Long Beach harbor like cattle around a feed trough are something we won't soon forget.

We added a step to our typical Top 10 rundown this year: We asked each writer to pick the story they either enjoyed writing the most or thought was their most significant addition to the DTN content mix. Those "writer's favorite" stories are varied, from hard-nosed investigative journalism to fun features to stories that actually influenced the author's life and actions.

So many of our Top 10 pieces are about things that weighed upon you, things you needed to know or to react to in order to make business decisions. Yet, so many of the writer's favorite pieces are about you -- about the farmers who share their thoughts with us, share their successes and failures, even share their profit secrets. As the world of agriculture consolidates, as the number of us willing to make a go in this industry shrinks, that willingness to share yourselves with us and with the world grows ever more important.

And for that, for the entire DTN and Progressive Farmer team, I say thank you. Thank you for bringing our world into your homes and businesses. And thank you for sharing your world with us.

Have a safe, happy and prosperous New Year. 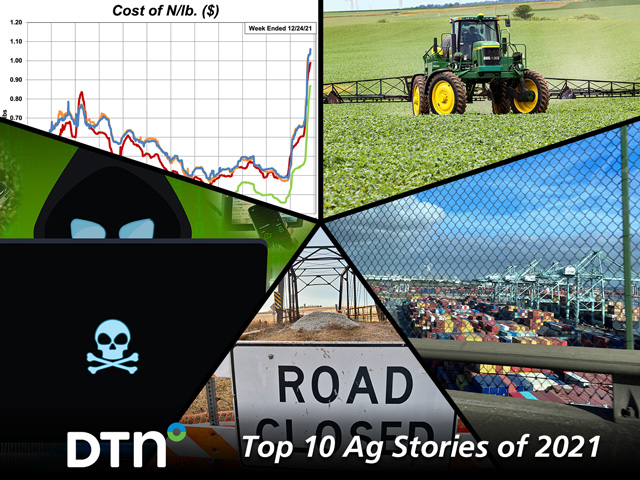