Editor's Note: Each year, DTN publishes our choices for the top 10 ag news stories of the year as selected by DTN analysts, editors and reporters. We continue the countdown with No. 9, looking at the Infrastructure Investment and Jobs Act, passed by Congress in November, and how it will boost federal spending on roads, bridges and digital infrastructure such as broadband during the next several years.

OMAHA (DTN) -- With the backing of agricultural and business groups, Congress closed a deal in November on a $1.2 trillion plan to upgrade the country's roads, bridges, ports and electric grid with the passage of the Infrastructure Investment and Jobs Act.

The bill, with an injection of $550 billion in new spending over 10 years, had been considered a necessity for the United States for more than a decade, but dilapidated bridges, jammed ports and Western drought finally prompted Congress to agree on a collection of needed projects.

The funding will provide one of the largest increases in investment in roads, bridges, waterways and electric infrastructure in history, but the act is viewed by some through the partisan lens that darken political debate in the modern era.

The new law will increase spending for roads by $110 billion, including another $40 billion for bridge projects. Another $66 billion will go toward rail.

The new law also includes $7.5 billion for electric charging stations, which is smaller than what President Joe Biden had proposed earlier in the spring. Biden originally wanted to build out 500,000 charging stations nationally. Still, the White House sees the prospects of creating that many charging stations as the administration focuses on expanding the sale of electric vehicles.

As the legislation was written during this year's drought, Western senators also added tens of billions of dollars for water projects, such as upgrading and expanding Bureau of Reclamation dam and canal projects. The bill includes $50 billion for various water infrastructure, including increased storage and irrigation conveyance.

Another $500 million will go to the U.S. Department of Agriculture Natural Resources Conservation Service Watershed and Flood Prevention Operations (PL-566 projects) to help reduce the project backlog. DTN had highlighted in June how the USDA watershed program addresses both drought and flood risk in rural areas, as well as expanding rural drinking water supplies.

Another $8.58 billion in the bill goes for carbon capture projects, including $2.5 billion for the Department of Energy to develop commercial scale projects.

Along with the funding were other provisions. Livestock and trucking groups had backed language in the bill such as the Haulers of Agriculture and Livestock (HAULS) Act, which would allow livestock haulers to bypass normal trucking hours-of-service limitations if the haulers are within 150 miles of their final destination.

To help address the shortage of truckers, the bill also has provisions to open interstate trucking to commercial drivers as young as 18. The White House last week announced it would move ahead with plans for a pilot project for younger truck drivers.

Politics, as usual, came into play on the infrastructure bill. In the Senate, 19 Republican senators backed the bill in August, including Minority Leader Mitch McConnell, R-Ky. In the House, though, 13 Republicans joined 215 Democrats in backing the bill. At least some GOP members saw backlash for backing the bill.

The bill was supported by groups such as the U.S. Chamber of Commerce and the American Farm Bureau Federation, groups generally more aligned with Republicans. The bill also garnered backing from groups representing blue-collar workers such as construction unions and long-haul truckers. 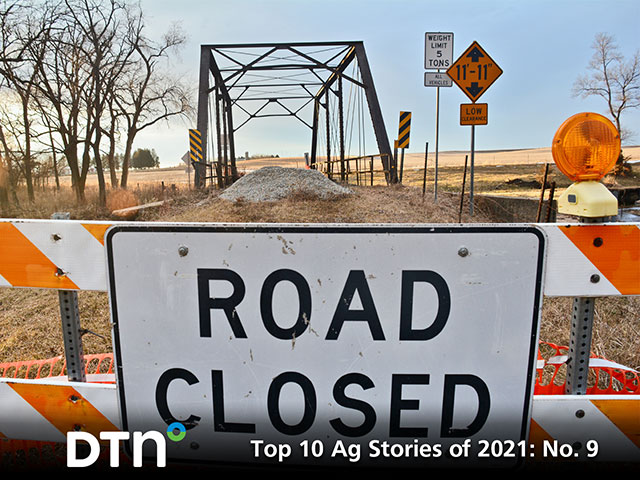