Editor's Note: Each year, DTN publishes our choices for the top 10 ag news stories of the year, as selected by DTN analysts, editors and reporters. No. 5 looks at the impact of weather events that were blessings or curses depending on where you were in the country this year.

MINNEAPOLIS (DTN) -- La Nina was the key phrase going into the 2021 crop year. But weather conditions sure did not behave like it. Typically, we see a weakened polar vortex during La Nina, but the early goings of 2021 did not show it. However, that changed briefly in February when a particularly severe mass of arctic air descended through the Plains and points eastward.

Most of us can remember that brutal one to two weeks' worth of bitter cold, partly because what it did to the southern United States in Texas. Temperatures fell below zero all the way down through Oklahoma and north Texas, while the Northern Plains routinely dealt with temperatures of minus 30 to 40 degrees Fahrenheit. This event eventually led to supply-chain disruptions for all sorts of commodities that are produced in Texas, and especially energy as natural gas prices spiked as the infrastructure froze uncharacteristically.

But that was the only real event that La Nina contributed to. It quickly weakened in the early spring and lost its chance to produce significant drought across the Central and Southern Plains. That concern was alleviated as a couple of large late-spring storm systems eliminated drought that had built up during the winter and early spring months, setting up winter wheat in really good shape. Those storm systems also brought good precipitation to the Delta and Eastern Corn Belt.

Planting for corn, soybeans and spring wheat got a good head start for the year based on favorable warm weather. But late frosts in April and May caused some folks to replant corn and soybeans across the northern tier of the country or withstand some damage.

But when the calendar flipped over to June, the upper-air pattern changed in drastic fashion. A ridge of high pressure built up over western North America and anchored itself there through mid-August with very little disruption in it. The heat and dryness that it brought led to flash-drought developing for the western U.S., the Canadian Prairies, and northwestern Corn Belt. Through mid-August, extreme drought had expanded greatly from Washington and Oregon eastward through the Dakotas and most of Minnesota and northwest Iowa. Drought decimated prospects for spring wheat, although corn and soybeans got some late rains from mid-August to mid-September to stave off the greatest damage.

It was about this time in early fall that La Nina started to form again, developing for the second-consecutive year and causing drought conditions to reappear in the Central and Southern Plains. The southwestern Plains, especially, dried out, and the heat and dryness has caused poor conditions for winter wheat stands going into dormancy.

In contrast, wetter conditions in the Eastern Corn Belt during the summer led to record corn and soybean production. Much of the region got good, timely rains and rarely received too much. Severe weather was also less of a concern, though there were a few isolated events here and there that did produce crop damage. September dried out as the Western Corn Belt got rain, helping to dry down corn and soybeans and allow for a quick start to harvest.

But rains returned to cause delays in October and November, taking the excitement out of a good season for some and reducing planting of soft-red winter wheat in the region.

Still, soil conditions in the Eastern Corn Belt are much more favorable to end the year than out in the Western Corn Belt. While late-summer and fall precipitation knocked good chunks of drought out of the Dakotas, Minnesota and Iowa, it has only affected topsoil moisture, and subsoil moisture continues to be lacking. As La Nina starts to build back up this winter, it will become a concern again for producers in the Plains as drought may reappear in the north and deepen in the south.

As we drew near September, a larger event took shape that could have been a bigger disaster for agriculture than it was. Hurricane Ida went north through the central Gulf of Mexico at the end of August. Originally forecast to bring flooding rain to the Delta region, it just missed off to the east, saving these crops from inundation, and falling far enough west to avoid much of the cotton crop in the Southeast.

However, the storm did bring flooding rains through Mississippi, Tennessee and Kentucky and massive damage to the Port of New Orleans. The latter caused shipping to slow for a few weeks, which was a much larger market concern. (See more about Ida's impact at https://www.dtnpf.com/….)

La Nina also has made for some wild weather in December. Two strong storm systems moved through mid-month with dire consequences. The first produced supercells that produced wind damage and long-tracked tornadoes across the Midwest and Midsouth. As of Dec. 21, 89 people lost their lives and widespread damage occurred from Arkansas and Missouri through Illinois, Indiana, Kentucky, Tennessee and Ohio.

That system was followed five days later by another strong storm system in the Plains and Midwest that appeared more like a spring storm than a winter one. Temperatures broke all-time December highs from Omaha, Nebraska, to Madison, Wisconsin, and fed the storm system that produced a derecho from north-central Kansas and south-central Nebraska through northwest Missouri, Iowa and southeast Minnesota. Tornadoes occurred for the first time in December in Minnesota, and 15 of them were confirmed for the date. Background winds roared over 70 miles per hour across a wide area of the Plains and western Midwest causing all sorts of farm damage, wildfires and power outages. Wheat crops have been buried in dust and roots have been exposed, which could further affect the 2022 season.

Every year produces significant weather events that can be both helpful and harmful to producers. 2021 was no different, and you can bet that 2022 will not be either. 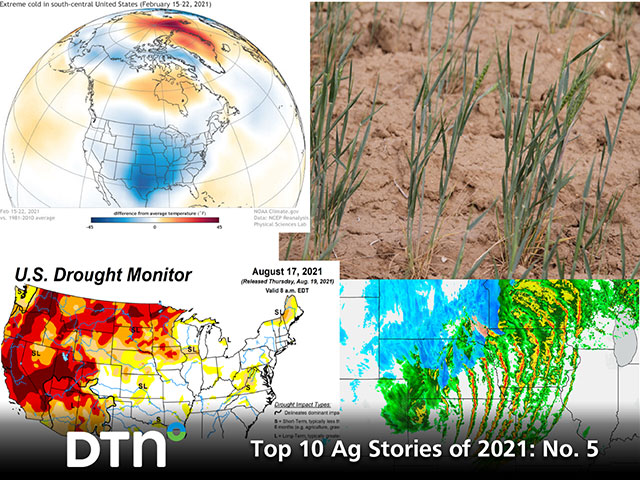