Editor's Note: Each year, DTN publishes our choices for the top 10 ag news stories of the year, as selected by DTN analysts, editors and reporters. No. 7 focuses on how higher cattle prices are finally here, giving producers a perfect time to plan ahead and manage for profits now and into the future.

BIRMINGHAM, Ala. (DTN) -- Throughout 2021, cattle markets left producers in a wait-and-see marketing mindset far longer than anyone expected. DTN Livestock Analyst ShayLe Stewart knows firsthand how frustrating it's been for cattle producers as they wait to get to the other side of beef's incredibly slow liquidation cycle. But she said opportunities to capitalize are finally here.

Stewart acknowledged that, in recent years, calf prices have been subpar at best. Add to that a series of steady increases in input costs, and for most operations, there has been no way to pencil out a profitable equation for most of 2021. But wait.

"While I thoroughly understand that a large percentage of producers in the North are still facing historic drought conditions, we can't overlook the opportunity that is bound to ignite the 2022 market," Stewart said. To put it simply, it's all about the numbers of beef and dairy cows slaughtered, and an ongoing liquidation of feeders that remained backed up longer than anyone expected.

"As the market adjusts to a significantly smaller cow herd, cow-calf producers are going to get that opportunity they've been wanting to finally demand higher prices and regain some profit share, as feedlots have to be more aggressive in buying calves," she said, adding that 2021 hasn't been a total bust either.

While 2021's live cattle market has had plenty of hurdles to overcome, by year's end, there will be plenty of noteworthy accomplishments to look back on, said the analyst. At the top of that list, she noted, will be the fact that this is the year when the industry saw an aggressive slaughter pace come into play.

"As we went to press, nearly 26.64 billion pounds of beef (up 2.4% from a year ago) had been processed, with an average chain speed of 638,591 head of cattle processed each week," she reported. "So, while the cash cattle market struggled immensely over the past two years, as fourth-quarter 2021 dawned, we saw the market make a significant shift in leverage from packers to the feedlots sector. And, as a result, cash cattle prices shot higher, trading over $130, and then $140."

In its most recent report, RaboResearch, concurred with Stewart that the numbers are really beginning to add up for cow-calf producers.

By the end of November, the group reported beef cow slaughter was up 10%, and dairy cow slaughter was up 2%. In large part, Rabobank's analysts attributed this depopulation of the cow herd to continued drought liquidation. Next year, it is that drop in the cow herd that will logically lead to fewer calves on the ground. Beef production in the U.S. is projected by the group to drop 2.5% next year. That number could go higher as limited hay supplies and higher feed prices prompt some producers to hold fewer head than they'd like moving into the spring.

Lead author for RaboResearch's quarterly report, "U.S. Beef Contraction Driving Global Tightness," is Angus Gidley-Baird. The analyst noted the U.S. has shifted from being a net importer of beef to being a net exporter. Beef exports for 2022 are projected to climb 2% to 4%, with China a key to meeting that projection. Domestic demand for beef is expected to contract due to the increase in exports. The balance will be overall positive for prices.

Calling the U.S. market "solid" for 2022, the Rabobank protein sector team noted the backlog of market-ready cattle is finally easing. "The huge driver expected to improve cattle prices in the new year is the fact that beef packers are slowly showing headway in stabilizing their workforce, which has improved weekly slaughter rates," Rabobank's report noted. By year's end, fed cattle prices are projected to be at $135 per hundredweight (cwt); for 2022, the projection goes up to $140/cwt.

MARKETS EMERGE FROM THE SPECTER

Oklahoma State University's Derrell Peel is on board with analysts who believe the time is near for the balance of the market to shift.

The veteran livestock marketing specialist said cattle markets are finally moving "out from under the specter of the pandemic impacts that began 18 months ago."

The way is clear for cattle to finally move forward, said Peel. But, as always, there are likely to be challenges on the horizon. Peel is watching uncertainty around new strains of COVID-19, continuing drought in parts of the U.S. and higher input prices.

The beef cow herd, which has been declining since 2019, could continue to see numbers drop into 2023. But strong demand for beef will fuel a cyclical expansion to regrow herds sooner rather than later.

Peel advised producers to take the next few weeks, after calves have been marketed and culling decision made, to review this year and plan for 2022.

Specifically, he stressed now is the time to consider conditions of pasture and rangeland moving into the new year, and to set good grazing plans and adjust stocking rates. Look at weaning weights and reproduction rates to see if management goals are being met. And keep a focus on nutritional needs for the herd moving through the coming winter months.

"The industry has waited many months for a bit of relative stability," he said. "There will no doubt be adversity and producers must be prepared for risks and negative outcomes, but (they) also need to be ready to grab the opportunities that will come. The cattle industry can look forward to 2022." 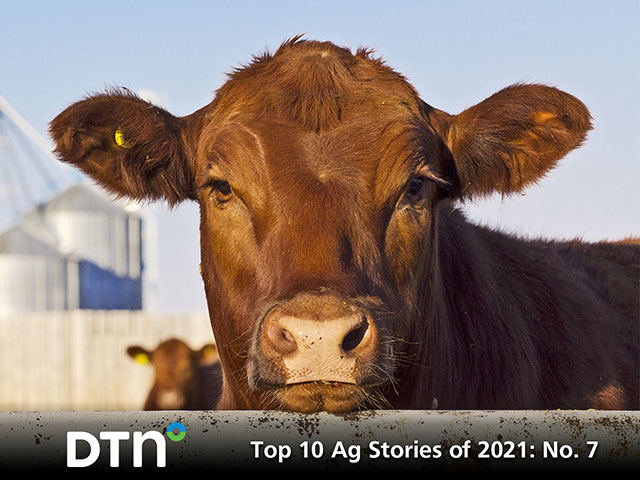