Editor's Note: Each year, DTN publishes our choices for the top 10 ag news stories of the year as selected by DTN analysts, editors and reporters. We continue the countdown with No. 8. The economy was making a rebound, grain export season was about to begin -- and then Hurricane Ida came along.

OMAHA (DTN) -- Corn prices were having a good summer in 2021, fresh off record purchases from China in 2020-21. Even after reaching a peak of $7.48 on May 7, DTN's National Corn Index of cash prices chopped only slowly downward the next three months, managing to stay above $6 a bushel in the process, the highest cash corn prices seen in eight years.

Soybean prices did not hold together as well as corn but did manage to stay above their January low of $12.67 and maintained their highest level in seven years right up until Sept. 1.

Both corn and soybeans experienced some bearish pressure at the end of August as rains appeared in the forecast for the drier areas of the northwestern Midwest. But it was Hurricane Ida that turned both of these weakened bull markets onto downward bearish paths.

The extent of the damage was not immediately understood, but within days it became clear that barges of newly harvested corn and soybeans would not reach the Gulf of Mexico anytime soon. On Sept. 2, DTN's Basis Analyst Mary Kennedy and Ag Policy Editor Chris Clayton reported significant wind damage across New Orleans and surrounding areas (See https://www.dtnpf.com/…). Nearly 800,000 people were without power. Grain terminals along the lower Mississippi River were damaged and, without power, it was difficult to know how long repairs would take. Rail lines servicing the terminals were shut down.

What's more, the Coast Guard had to close sections of the Mississippi River due to a significant number of barges and vessels sunk or grounded. All this was happening as U.S. growers were in the process of harvesting 15.06 billion bushels (bb) of corn and 4.425 bb of soybeans. It was a discouraging start to the new 2021-22 season and corn and soybean prices slid lower.

It took roughly six weeks for corn and soybean shipments to return to more normal levels. Favorable weather in October and November helped the effort, but repairs are still being carried out today.

In addition to halting grain trade to the Gulf, Hurricane Ida also temporarily shut down oil and gas production in the Gulf, adding to the inflationary pressures that many are concerned about in 2021. The hurricane was also credited with interrupting the production of fertilizer, adding to this year's sharply higher prices.

According to the National Hurricane Center, there were 21 named hurricanes in 2021, the third most active season on record in terms of named storms. Considering the number of expensive tentacles spawned from Ida, it was enough bad news for U.S. ag producers.

Todd Hultman can be found at Todd.Hultman@dtn.com 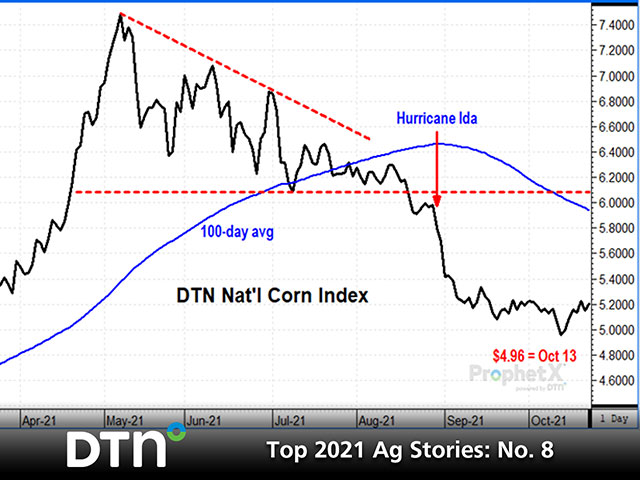