The DTN Digital Yield Tour, powered by Gro Intelligence, kicked off on Monday with national yield estimates for corn at 167.2 bushels per acre (bpa) and soybeans at 48.9 bpa. Both estimates are lower than USDA numbers, which have set marks at 177 bpa and 51.5 bpa, respectively, as of the July World Agricultural Supply and Demand Estimates (WASDE) report. The USDA is set to release a new WASDE report on Friday, Aug. 12. Those estimates are at or near trendline. Many private estimates are following a similar suit, in some cases only slightly lower. Gro's modeling differs from theirs, and you can read about that in this article by DTN Farm Business Editor Katie Dehlinger here: [https://www.dtnpf.com/…

But one of the most important factors as to why Gro's numbers are significantly below both USDA and other private entities is the strict use of observable data, and primarily widespread satellite data, to gauge crop health and development. And one thing that satellites would be able to see that other sources would not is the wild variability in weather and how it affected crop progress this year.

It is hard to find many areas that have had consistently hot, cold, dry, or wet conditions all season long. But the Central and Southern Plains have been consistent. From Nebraska down through Texas, hot and dry conditions have plagued the region with drought going back to last fall. While planting went easily, establishment and growth have been tough. When rains have come, they've typically come with severe weather. Nebraska has certainly seen its share of severe reports with a derecho in April and significant hailstorms in June. That is on top of the blowing dust and strong winds that depleted soil moisture this spring. During the summer, daytime highs hitting the triple-digit mark have been routine. Wichita, Kansas, averages 14 days above the 100-degree Fahrenheit mark in a calendar year. Through Aug. 7, the count has already reached 20 such days. A quick look at their 14-day forecast reveals six additional days with several more forecast in the upper 90s. Kearney, Nebraska, averages 12 days over 95 Fahrenheit in a calendar year but has already had 17. Their 14-day forecast shows potential for a couple more of those days this week. Even when cold fronts have come through, temperatures have rarely been of the below-normal nature. Crops in this region have suffered all season long and have been more dependent on irrigation.

The northwestern Corn Belt consisting of the Dakotas and Minnesota started cold and wet. Planting was delayed, but soil moisture has been very good overall. North Dakota was hit hardest by flooding in April and the cold stuck around through May, but the soil moisture has been deep and long-lasting. Crop conditions have had a tremendous turnaround from where they were last year. But these states are still dealing with acute dryness in spots and drought has crept into South Dakota and parts of Minnesota throughout the season. The delay in planting has pushed the crop year out a bit farther and crops are still silking and very little of it is filling according to the USDA NASS Crop Progress report issued on Aug. 1. Here, weather will still play a significant role in the rest of the season and yield estimates are likely to change based on the weather that occurs. Forecasts for the rest of August are calling for hotter and drier conditions, but there are always exceptions to those forecasts and timely rains are usually more important than overall amounts.

The central Corn Belt states of Iowa, Missouri and Illinois have been variable as well. Wet weather has come and gone, occurred in streaks, and completely missed some areas. Southern Iowa, southern Missouri, and a small section in east-central Illinois have all been on the losing end of precipitation frequency and amounts. Drought developed in these areas and has not been relinquished, even with active fronts and precipitation over the last few weeks. But other parts of these states have had decent or fantastic rainfall. Others have seen flooding, especially in eastern Missouri and southern Illinois. Northern Iowa received heavy rain just this past weekend that caused some flooding as well. The one consistent weather feature has been the heat. Temperatures have been well above normal all summer long. Fronts that have come through may have brought temperatures down, but only relatively and for brief periods before the heat has returned. Missouri has been especially hot, with the same ridge of high pressure in the Plains flooding the state more frequently.

Wisconsin and the Eastern Corn Belt states of Indiana, Michigan and Ohio have been more on the beneficial side of the weather this season, but they have had weather challenges as well. Like other areas, planting was delayed for most areas due to a cool and wet April and May. And those who did get planted early had to deal with late frosts in May. June started a period of heat and dryness. Flash droughts developed through a lot of these areas, and when rains came, they came with severe weather. But in July, the rains returned right at a critical time for corn. Rains were moderate but not heavy or flooding like in other states. They have also been relatively widespread. Only a small section in west-central Indiana and around the thumb region in Michigan are still dealing with drought. The rest have seen their drought concerns disappear. Temperatures have been hot at times, but they have generally come ahead of cold fronts that brought showers and cooler temperatures. Another couple of fronts will do that this week as well. With soil moisture in good standing for much of the region, soybeans are set up nicely for their critical August fill period.

Overall, the weather this season can be summed up with one word -- variable. As one person from Gro's team of scientists put it, variability tends to lead to lower yields. There is still a lot of weather yet to determine this year's final numbers. We are at that critical time for both corn and especially soybeans where weather, and in particular rainfall, will affect the final outcome. Looking at the latest forecasts, it still looks variable for a lot of areas. 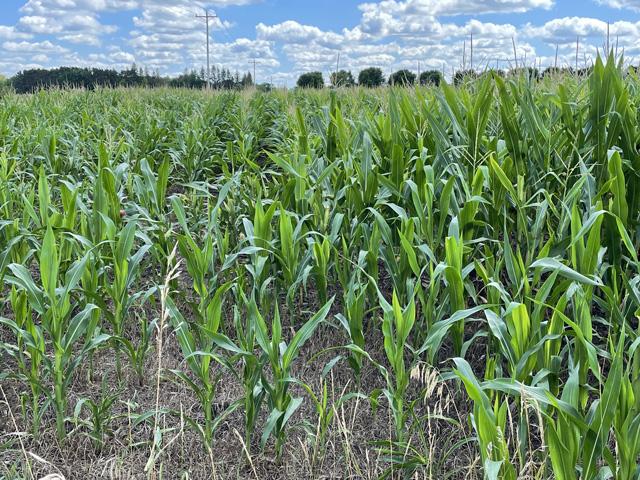