Drought continues to plague the U.S. winter wheat crop. Following a 2022 harvest that was down 14% from a year ago, dry soils are now affecting the start of the 2022-23 Plains and Midwest winter wheat crop. New seeding emergence totals in the southern Plains and the Midwest were from 10 to almost 20 percent below average in mid-October.

"Winter wheat is behind schedule," said USDA meteorologist Brad Rippey in a NOAA forecast webinar. "This is a real warning flag."

USDA's Ag in Drought report for mid-October showed 70% of the nation's winter wheat areas are affected by some phase of drought. That's far above the indicator a year ago, which showed 41% of winter wheat areas in some stage of drought. Rippey noted that drought in the past three years, 2020-2021-2022 rivals the years 2011-2012-2013 in its coverage and impact. This multi-year drought coincides with the development of a Pacific Ocean cool-water La Nina event which is forecast to be on the world weather and climate scene for the third straight winter.

Short-term forecasts indicate scattered precipitation of up to one inch during the last week of October. "That may help wheat emergence," said South Dakota state climatologist Laura Edwards. South Dakota is one of the states with a slow start to the winter wheat cycle.

The rest of the fall season and on through winter are not offering much precipitation for the central and southern U.S. except for the Great Lakes area. It's not a promising scenario for the hardest-hit drought areas. "Fall is one of the optimal times to get moisture," said Edwards. "We're likely to start out in tougher condition for next spring." Edwards also noted that winter wheat can be very thrifty in its moisture needs for survival. "Just enough moisture to swell the seed in the ground can get it through the winter," she said. However, that's not ideal for the new wheat crop. "Wheat can survive, but it's always better to have the crop starting out with good moisture before it goes dormant (in winter)," Rippey said.

Atmospheric factors supporting La Nina remain strong going into the last portion of the fall season. The Southern Oscillation Index (SOI), a central Pacific Ocean indicator that compares air pressure values between the island of Tahiti and Darwin, Australia was calculated at 19.57 for the running 30-day value on Friday, October 21, with a 90-day running SOI value of 14.99. Both values are well above the threshold La Nina value of 7.0 and point to strong east-to-west winds in the equatorial Pacific which take ocean moisture away from North and South America. Official forecasts place a 75% chance of La Nina remaining through February 2023, which means a dry winter ahead and no letup in the uncertainty over next year's wheat crop. 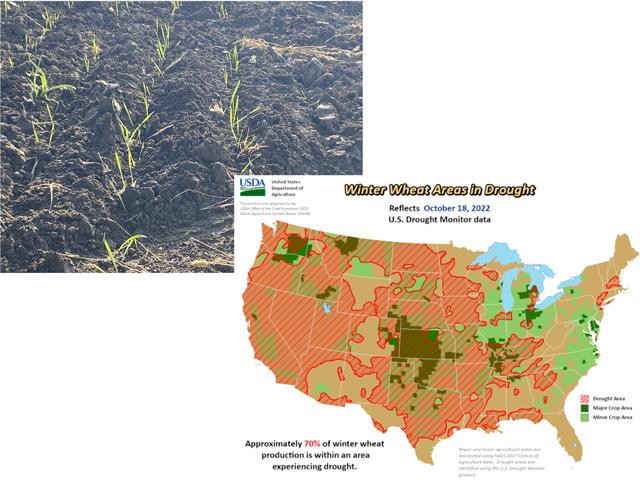