SAN JUAN, Puerto Rico (DTN) -- Beyond an agreement with John Deere on right-to-repair rules, American Farm Bureau Federation President Zippy Duvall told members on Sunday that 2023 expects to be a big year in the policy arena for farmers.

Duvall opened the general session at the group's annual meeting, held for the first time in San Juan, Puerto Rico.

Touting regulatory success stories, Duvall highlighted a proposed rule from the Securities and Exchange Commission that would require companies to report greenhouse gas emissions in their supply chains.

"We knew it would have big effects on our farms. That rule could have meant more red tape and confusing paperwork," Duvall said.

He noted that within a few weeks, AFBF generated nearly 5,000 messages to the SEC about the rule. "And we got their attention. I have spoken to (SEC) Chair (Gary) Gensler, and he gets it. Still, we'll keep a watchful eye as they rework that rule."

Still, Duvall expressed frustration at EPA over the latest version of the "waters of the U.S." rule that EPA released at the end of December. AFBF last year sent more than 3,800 messages to EPA about the proposed rule.

Duvall told the story of an Illinois farmer who wanted to make changes to his farm and got different takes on whether he needed a permit from staff at federal agencies.

"If our government can't even understand the regulations, how can they expect the American people to understand them? Right? We should not have to hire a team of lawyers to tell us how we farm our land," Duvall said.

In submitting comments to EPA, Duvall said farmers need a rule that is "clear, fair and easy to understand. The EPA seems to have ignored much of what we said."

Duvall also told reporters later that he and others did not understand why EPA pushed out the rule when the Supreme Court will rule over the Sackett lawsuit sometime in the next few months.

"We are very disappointed first that the EPA didn't wait for the Sackett case in the Supreme Court to come forward," Duvall said. He added, "This new rule is a rollback of what we thought was a commonsense approach that was in the last rule."

In talking about sustainability, Duvall pointed to surveys showing the public trusts farmers. "Surveys show that they trust us more than the federal government and even more than environmental groups," Duvall said, drawing applause. He added, "They trust you to make the right decisions on your farm. You should be very proud of that. But it's time for the federal government to trust you to do the right thing, too."

Among the initial challenges in the House of Representatives are demands to cut federal spending. That perspective, however, was not part of AFBF's read on the prospects of a farm bill getting passed in 2023.

"It's really a food and farm bill and it benefits not just farmers but all Americans and that's something we think we need to bring attention to," Duvall said.

"That makes 260 who may not understand the importance of farm bill programs and that's nearly half of our Congress! We have to put in the extra work to show them why we need to pass the farm bill this year."

"To hit just the highlights, we must protect and expand crop insurance," Duvall said.

He added that the farm bill must "ensure conservation programs remain voluntary and science-based."

Duvall also added that farm policy and nutrition policy must remain united in a farm bill. Those kind of splits in the past have failed, but nutrition programs could be under more pressure to face cuts or tightening of eligibility under GOP plans to cut spending.

"When ag and hunger advocates lock arms together, we have our best chance of success, which we must never take for granted," Duvall said.

When Sam Kieffer, vice president of public affairs for AFBF, was asked about the political demands from GOP members to cut spending in domestic programs, he said, "Pressures will exist, but it's not unprecedented."

Despite a farm-labor reform bill dying in the last Congress, Duvall championed the issue again. "It's a political lightning rod," he said.

Speaking to reporters, Duvall noted he had been talking about ag labor since he became AFBF president. Still, Farm Bureau opposed the bill that passed the House in 2021 and refused to back a Senate proposal last month.

"The last-minute effort in the Senate just wasn't enough," he said.

Duvall said the bills didn't provide enough year-round workers and the wage rate used for H-2A workers "is not sustainable."

"We're hoping this administration will engage a lot more than they have in the past," Duvall said.

Pointing to current trade issues farmers want to see addressed, Duvall pointed to Mexico's plan to eliminate imports of biotech corn. "The first thing we want them to pay attention to is the GMO issue with Mexico," he said.

Asked about trade deals and Trade Promotion Authority (TPA), Kieffer said there are countries ready to negotiate. A trade deal with the United Kingdom "is ripe for the picking," Kieffer said. 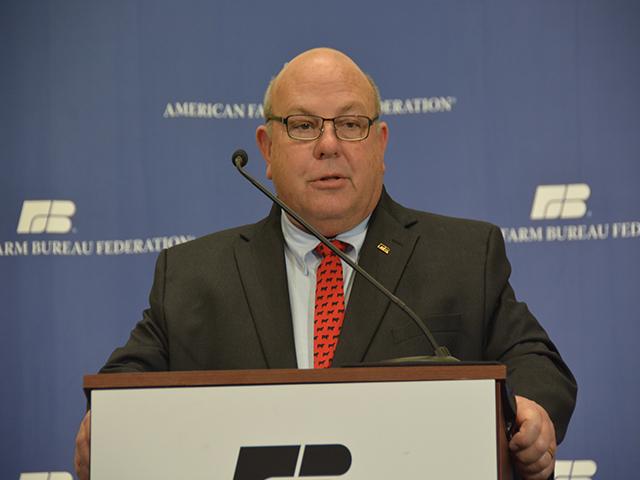