In a lengthy statement, Stabenow, 72, said she is passing the torch to a new generation but will concentrate on legislation for the next two years, including passing a new farm bill.

'"For the next two years, I am intensely focused on continuing this important work to improve the lives of Michiganders," she said.

"This includes leading the passage of the next five-year farm bill which determines our nation's food and agriculture policies. It is also key in protecting our land and water and creating jobs in our rural and urban communities."

Stabenow has been the dominant policymaker for the last several farm bills and her decision to retire will increase pressure to pass a new bill while she is office rather than an extension.

Over the past year, Stabenow also was instrumental in securing $19.5 billion in climate-smart funding for USDA conservation programs as part of the Inflation Reduction Act.

Stabenow chaired the Senate Agriculture Committee from 2011 to 2015 and became chairwoman again in 2021, but she played an important role even when the Democrats were in the minority.

Although she and House Agriculture Committee Chairman-elect Glenn "GT" Thompson, R-Pa., have both said they are determined to pass a farm bill before the current one expires on September 30, 2023, there have been rumors that some Republicans would prefer to pass an extension and write a new bill in 2025 after the next presidential election, in hopes a Republican wins that race.

The 2022 elections made the Democrats more dominant in Michigan politics than the party has been in decades, but the Senate race is expected to be competitive.

National Farmers Union President Rob Larew described Stabenow as "an amazing partner for NFRU and our members throughout her career." Larew added that NFU members look forward to engaging Stabenow about the upcoming farm bill.

"Family farmers and ranchers in Michigan and across the country have a champion in Senator Stabenow and we wish her the best as she completes her term as Chair of the Senate Ag Committee," Larew said.

The International Fresh Produce Association (IFPA) described Stabenow's decision not to seek reelection as "bittersweet. The group credited Stabenow for her work supporting specialty crops and elevating produce to be included in federal programs.

"It has been an honor and my pleasure to work with Senator Stabenow and her staff all these years. Her wisdom and leadership on ag issues is second to none and I am happy to know she will be in the Chair for the upcoming Farm Bill," said IFPA Chief Policy Officer Robert L. Guenther.

"I appreciate Chairwoman Stabenow's leadership and our history of working well together to get important legislation, both to help producers and ensure children have access to healthy and nutritious meals during the summer, passed into law," Boozman said. "We will continue to build on those efforts as we work to pass a farm bill this year that will provide producers with the safety net they need during a very precarious time for agriculture. Last year, I was pleased to visit Michigan and then welcome Chairwoman Stabenow to Arkansas to kick off that process. Her work with former Chairman Pat Roberts to pass the last farm bill that received a record number of votes in support on the Senate floor gives me confidence that we can move the next farm bill forward this year in the same manner to empower America's farmers and ranchers to continue producing the safest, most affordable food supply in the world."

Rep. David Scott, D-Ga., former chairman and now ranking member of the House Agriculture Committee, said, "Chairwoman Debbie Stabenow has been an invaluable part of critical food and agriculture legislation since her service on the House Agriculture Committee. She is a tremendous leader for agriculture and a great partner to have in the Senate as we serve as the Democratic leaders of our respective committees. Senator Stabenow's influence has helped safeguard nutrition funding, promote the diversity and breadth of the specialty crop industry, advance urban agriculture, and protect conservation programs, among countless other issues. I look forward to continuing our work together as we defend Democratic priorities in the next farm bill." 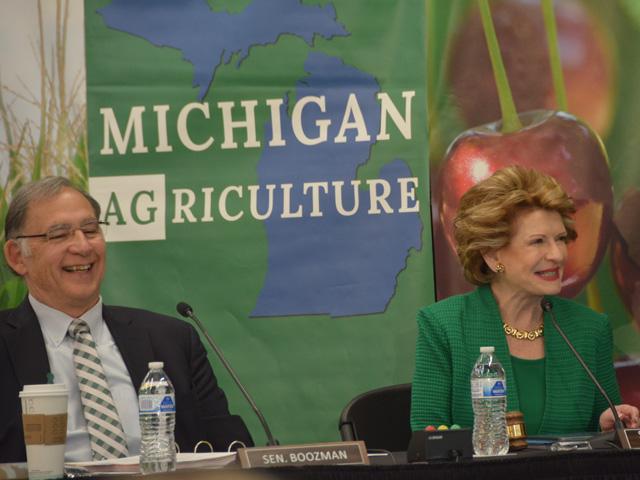