Delegates at the AFBF resolution session also want to see more crop insurance options for specialty crops in the next farm bill.

The push for higher spending in the farm bill may run into a roadblock in the House of Representatives where GOP members are calling for cutting up to 25% of spending in federal non-defense agencies.

After Farm Bureau convened a meeting on the Federal Milk Marketing Order last fall in Kansas City, Mo., delegates "also voted to bring more transparency to the federal milk pricing system," according to an AFBF press release. Among changes they would like to see in milk programs includes more USDA audits of processing costs to ensure data remains accurate. Farm Bureau would also like to see the Federal Milk Marketing Orders voting procedure changed that would require "cooperatives to communicate more clearly with members regarding proposed changes."

Reflecting the stance that farm groups and nutrition advocates should stick together to get a farm bill passed, AFBF delegates also "approved new policy to support access to nutrition programs including connecting farms directly with food banks, increasing the number of SNAP-approved food sales outlets, and other efforts to make produce available to families living in food deserts."

AFBF polled delegates regarding their farms at the beginning of the voting session. The results show almost 99% (334 delegates) of those who cast votes operate family farms and almost 65% represent small- to mid-size farms as defined by USDA.

On regulatory issues, AFBF formalized its opposition to the new Waters of the U.S. rule released by EPA at the end of December. AFBF also opposes a proposed Securities and Exchange Commission rule if the rule requires Scope 3 (supply chain) emissions reporting from farms.

Also see, "Vilsack Sees No Need to Compromise With Mexico on Biotech Corn,"

SAN JUAN, Puerto Rico -- Aides to the four top congressional leaders on the farm bill discussed the outlook for the bill on a panel here Sunday at the American Farm Bureau Federation annual convention.

Using a set of slides to illustrate his comments, John Newton, the chief economist for Sen. John Boozman, R-Ark., the ranking member on the Senate Agriculture Committee, said that surging exports and high prices driven by war in Ukraine have led to "the second golden age of net farm income."

But the 2023 farm bill debate is being affected, Newton said, by farmers expressing alarm over higher input costs and rising interest rates and land rates as commodity prices fall. In addition, Newton added, the "wild card" in the farm situation is China's relaxation of COVID-19 rules, which could put strains on global supply chains and affect the economy.

This situation, Newton said, has caused some farmers to call for a cost-of-production-related safety net.

Farmers in the audience told Newton that the current reference prices used to trigger farm subsidy payments under Title I of the farm bill are out of date.

Newton also noted that this farm bill will be the first to cost more than $1 trillion over 10 years.

The 2018 farm bill budget estimate was $800 billion over 10 years. The present estimate is that the current farm bill programs including the Supplemental Nutrition Assistance Program (SNAP) would cost $1.4 billion, with SNAP making up $1.1 trillion of that amount. Those figures could change by the time the bill is written, Newton said.

But Newton said it is vital to keep nutrition policy in the farm bill in order to get members of Congress on the populous coasts to vote for it. He also showed a slide indicating that SNAP payments, also known as food stamps, are important in rural areas. As a native Kentuckian, he pointed out that the county in the country with the highest rate of SNAP participation is in eastern Kentucky.

The recent ad hoc disaster programs have raised the issue of whether other farm programs should be changed in order to address natural disasters, Newton said.

He also noted that the farm bill helps improve U.S. farm bill productivity and that Boozman is very concerned about providing enough money for research.

Callie Eideberg, a senior professional staff member for Senate Agriculture Committee Chairwoman Debbie Stabenow, D-Mich., said that Stabenow's announcement she will not run for re-election in 2024 is "gut wrenching" for those who appreciate her leadership on past farm bills, but also creates the "impetus" to write a farm bill that includes her priorities and to write it before the current bill expires on Sept. 30, 2023.

Eideberg said Stabenow's staff has been instructed to meet that deadline and that she believes the Senate can meet it, but that she doesn't know if the House will live up to that goal.

Eideberg said an issue that must be addressed is how the additional money put into the farm bill programs by the Inflation Reduction Act will affect the 2023 farm bill. The Inflation Reduction Act included $20 billion for conservation programs and more money for rural development, energy and forestry and there is the question of whether that money "can be moved around."'

Eideberg said Congress can adjust how the money is allocated but the Congressional Budget Office might make it difficult to maintain the same level of spending authority that was in the Inflation Reduction Act.

The most serious issue for the 2023 farm bill, she said, is what it will mean "for the future of farming."

Whether the phenomenon is called weather volatility or climate change, the question is "what can we do in this farm bill" to set policies so that farmers can adapt and farms can be resilient over time, she said.

Nevertheless, Eideberg said, she is "really excited to tackle these issues this next year."

Because the House has not yet passed a rules package for the new Congress, Trevor White, an aide to House Agriculture Committee Chairman-elect Glenn "GT" Thompson, R-Pa., and Josh Tonsager, an aide to Rep. David Scott, D-Ga., the former chairman and incoming ranking member-elect on the committee, participated online from Washington.

Although Tonsager said that Scott held 19 farm bill hearings and other listening sessions this past year, White maintained that the committee is "far behind" on the farm bill and said the committee will issue an "aggressive calendar" of activity on it.

White also said that the issue "weighing heavily" on Thompson is what effort will be required to move a trillion-dollar farm bill through Congress.

White also noted that the pressure to move the bill is not so intense because SNAP and crop insurance won't expire and that the Democrats extended conservation programs in previous legislation. Only the farm programs would expire, and they make up only 5% of the farm bill budget, he noted.

The House Agriculture Committee will be looking for ways to improve the farm safety net, but the budget will be a concern, he said. The ad hoc disaster assistance "raised eyebrows," but may also contribute to the argument that putting more risk management into existing programs, he added.

White urged Farm Bureau members to "help us get the policy right, not dictate the process."

"Each farm bill has taken a different path to resolution," he said.

The most important advantage that the House Agriculture Committee has "an understanding of what farmers need," White said.

Tonsager noted that, while the Democrats were in the majority, Scott had focused on "laying the groundwork" for the farm bill beginning with a hearing with Agriculture Secretary Tom Vilsack on the state of the rural economy.

The Democrats' decision to include additional money for conservation, energy, rural development and forestry and to help the cotton merchandisers should "lessen the needs" in this cycle, Tonsager said.

Scott also wants to make sure that all producers have access to farm programs and is concerned about scholarships and land grant colleges, he concluded. 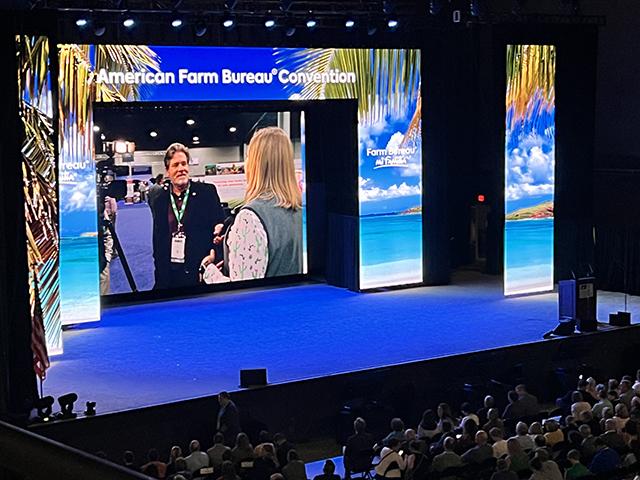