OMAHA (DTN) -- A push to overhaul farm labor and allow year-round guest workers on farms will likely die on the vine in Congress, but advocates for reforming farm labor still rallied around a bill introduced Thursday by Sen. Michael Bennet of Colorado.

Bennet, a Democrat, called his legislation, the Affordable and Secure Food Act, the "last, best chance" to overhaul the H-2A program and deal with one of the biggest challenges facing fruit and vegetable growers, as well as livestock producers such as dairy farmers.

"If we don't give growers certainty, we're going to see a lot of them go out of business at the same time," Bennet said.

Bennet's bill is similar to a bill that passed the House in March 2021, the Farm Workforce Modernization Act. But Bennet spent much of the past year trying to negotiate a bipartisan agreement with Sen. Mike Crapo, R-Idaho. However, Crapo did not join Bennet in backing this new bill.

Congress still has an omnibus spending bill to pass, and the Senate is trying to clear outstanding nominations for both judges and other unconfirmed positions in the Biden administration. Bennet said he had gotten assurances from Senate Majority Leader Chuck Schumer, D-N.Y., to add the farm labor bill to the spending legislation if Bennet got commitments from Republicans to vote for it.

The last-gasp push to get a bill comes because a Republican-led House in the next two years will be far less likely to pass any immigration bill that would allow more foreign workers into the country. Bennet acknowledged he was looking for "a Christmas miracle."

Chuck Conner, president and CEO of the National Council of Farmer Cooperatives (NCFC), said he and others in the agricultural labor coalition have met with Republican senators who support overhauling farm labor.

"There are many, many Republicans who would like to support this bill," Conner said. "Big agricultural regions in the country are represented by Republicans in the Senate." Conner added, "This is probably one of the most difficult threats these farmers have faced in generations."

The bill would legalize potentially hundreds of thousands of undocumented farm workers and their families and allow them to receive a green card after 10 years.

"What we're proposing here should not be complicated. It's a simple provision: If you work to feed America, you deserve the right to stay in America," said Teresa Romero, president of the United Farm Workers (UFW).

The bill would also create in the H-2A program non-seasonal visas that would allow up to 26,000 year-round H-2A workers to come into the country. That's been a goal for dairy farmers and others who cannot currently use H-2A because the work is not seasonal.

Still, the sticking point for some groups, such as the American Farm Bureau Federation, is that the 26,000 cap is not high enough to meet the labor needs. AFBF said Bennet's bill is an improvement over the House bill, "But we need a solution that meets today's farm and ranch demands from day one. For that reason, AFBF does not support the proposal and seeks additional improvements," said Sam Kieffer, vice president of public policy for AFBF.

While Bennet's bill also puts a temporary freeze on Department of Labor wage increases for H-2A, Kieffer also said the bill still "codifies the flawed methodology" that DOL uses in its farm labor survey to set wages, "which has led to wild swings in wage rates that are beyond the reach of many farmers. Farmers and their employees need a system that provides long-term stability. We will continue to work with lawmakers to find solutions that meet the needs of American agriculture and ensure an abundant food supply for families in the U.S. and abroad."

Some Republicans have been vocal supporters of reform, especially Rep. Newhouse, R-Wash., who was a co-sponsor of the House bill and stood Thursday with Bennet, Conner, Romero and others calling on the Senate to act.

"Our crops will go unharvested, and our already delicate food supply chain will be put further at risk," Newhouse said.

In the midst of a labor crisis, "why would we not pass labor reform?" Newhouse said. He and others also pointed to food inflation.

Still, the push to boost foreign farmworkers, mostly from Mexico, comes as news coverage focuses again on the southern border with the Trump-era Title 42 border enforcement rules set to expire next week. TV footage shows thousands of immigrants lined up waiting to cross into the U.S.

"This is a big part of securing our southern border, which is key, but also recognizing the contributions of immigrants and bolster our local produce," Newhouse said.

Jim Bair, president and CEO of USApple, and Kam Quarles, CEO of the National Potato Council, each talked about the labor demands required to harvest and sort each of those fruits and vegetables. The challenges in finding labor are forcing farmers to switch to less labor-intensive crops.

"The single thing we hear from producers in every one of those growing areas is the concern about access to the most valuable piece of their business, which is farmworkers," Quarles said.

Arturo Rodriquez, president emeritus of UFW, noted, "When the pandemic hit, farmworkers were told they were essential." Rodriquez also nodded to Conner, saying, "Many of us have been at this a long time -- 22 years."

Rebecca Shi, executive director of the American Business Immigration Council, broke down in tears as she talked about the need for reform. She said farmers have pointed to the people at border crossings and wondered why it is so hard to allow them to come work on farms.

"Right now, there isn't a legal and efficient pathway, that's what this bill creates," Shi said. "This is an actual real measure to reduce the chaos at the border and increase border security."

More details can be found at https://www.bennet.senate.gov/…. 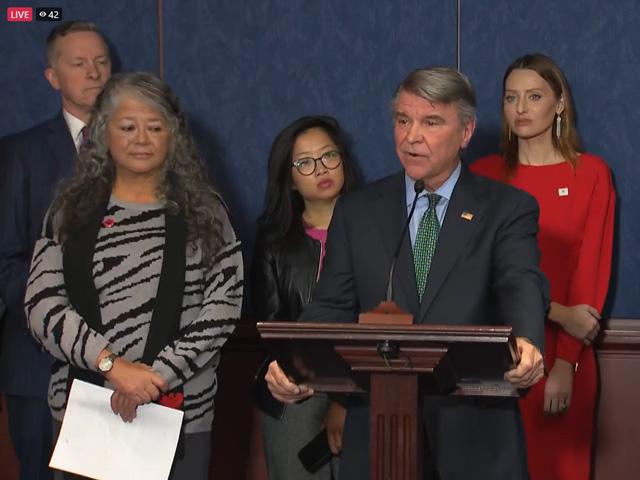