Editor's Note: As wildfire warnings were issued this week, the DTN/PF reporting staff got that deja vu feeling. Our coverage of the 2017 fires is still hauntingly fresh in our minds, and our noses. So were the lessons and the things people wished they would have done. DTN Staff Reporter Russ Quinn put some of those key lessons into the piece below in hopes others can learn from those effected in 2107. Thanks to Russ, Todd Neeley and the whole staff who continue to look for ways to help avoid the damage we've seen in other wildlands fires. (GDH)

It is human nature to wonder what could have been done differently after a natural disaster.

People may have hours or days to make decisions and prepare, such as in the case of an approaching hurricane. In other cases, such as a tornado or a wildfire, there might be only seconds to decide what to do and rush to save your life and the lives of others.

DTN staff covered the wildfires of the Southern Plains last spring, visiting with ranchers, firefighters and volunteers across Oklahoma, Texas and Kansas.

This week, the National Weather Service issued fire weather advisories and even red flag warnings in the Southern Plains, stating there were "critical fire conditions" and "any fires that develop can spread rapidly." (http://www.weather.gov/…)

Unfortunately, there was also a reminder that these types of fires are not a one-time threat. A report came out warning that the Central and Southern Plains are facing higher-than-usual potential of wildland fires through April. (https://www.dtnpf.com/…)

Rural communities as well as individuals spent months last year recovering from the fires in the Plains, but also re-evaluated what they could do to prevent or prepare for the next time fires hit. (https://www.dtnpf.com/…)

So what were some of the lessons learned by the people who went through the 2017 fires?

A subject often brought up by ranchers was the need for periodic prescribed fires. This managed type of fire burns off the extra plants found in the range, as well as less desirable plants. If a wildfire breaks out, there is less "kindling" available.

Excess grass and other plant material was a reason last year's wildfires were so devastating. The area had a lot of rain during the 2016 growing season, allowing plants to grow.

While some ranchers have championed the benefits of prescribed burns, others have been less willing to allow fire to burn their land. They are leery about starting a fire that could burn out of control. A prescribed burn wouldn't stop a wildfire, but there would be less plant material to fuel it.

Thousands of head of livestock, mainly cattle, were lost in the fires in the Southern Plains. One of the lessons learned was that there was no way to predict how cattle or other livestock would react to fires. Some ranchers saw livestock ran away from a fire, while other herds ran right through it.

Ranchers speculated it really depended upon the boss cow of the herd: If she could get away from the fires, the herd survived. If not, herd losses increased.

After the fires, people from all across North America responded by donating various supplies to the wildfire victims. This included thousands of bales of hay, fencing supplies, other forms of feed, clothing, food, water, etc.

While all supplies were much appreciated, some donations were more helpful.

Many gift cards to large retailers, such as Target and Walmart, were donated. While appreciated, those stores were often many miles from the remote ranches hit by wildfires. Cash donations would have been more convenient for wildfire victims, and more helpful to local businesses.

The American Red Cross strongly recommends you talk to family and others on the operation about what to do if there is a wildfire. Have an evacuation plan. Keep important documents in a safe-deposit box or a fire-resistant safe, have an emergency survival kit and make sure it is supplied.

If you are trapped in a wildfire, the Red Cross recommends you crouch in a pond, river or pool. Don't put wet clothing over your mouth or nose as moist air causes more damage to airways than dry air at the same temperatures.

If there is no body of water, look for shelter in a cleared area or among a bed of rocks, lie flat face down and cover your body with soil. Breathe the air close to the ground to avoid scorching your lungs or inhaling smoke.

After the fire, use caution when entering burned areas as hazards may exist, including hot spots which can flare up without warning. Avoid damaged or fallen power lines, poles and downed wires.

To see DTN's coverage last year about the wild fires in the Southern Plains, see:

Growing Greener: Bouncing Back From Wildfires

Rising From the Ashes

Town Bands Together to Help after Fire 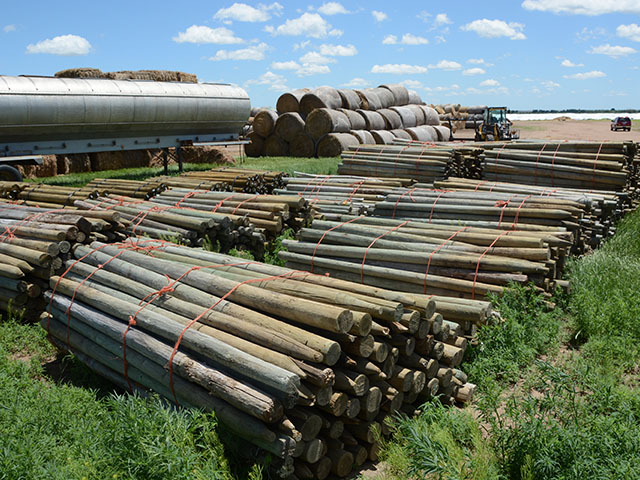