CANADIAN, Texas (DTN) -- When they're older, Chaz and Lori Rutledge's children will hear a harrowing tale from their parents.

They'll hear how their family nearly lost everything March 6 in a towering inferno in the eastern Texas Panhandle, but were saved by a changing wind and an outpouring of kindness from strangers.

The Rutledges lost most of their grasslands that day and half of the cattle on their Canadian, Texas, ranch.

It all started with a fire sparked by a damaged power transformer about 20 miles west of the ranch.

Early in the day, as Chaz Rutledge sat in his pickup nine miles from home, he could see smoke building on the horizon. He called home to tell his wife and their children Milly, 2, and Hudson, 1, to head for town.

In a matter of minutes, flames jumped across the highway as he sat in his truck. He realized the swirling winds moved the flames far faster than anything he had ever seen.

Chaz Rutledge raced back to the house at 90 miles an hour on gravel roads.

"By the time I got down the roads and down to here, the fire was already on the ranch," he said.

A helicopter pilot painted a bleak picture on the emergency radio, as he landed several times to evacuate area residents.

"At one point, they had told the helicopter pilot to try and get out in front of that fire and the fire chief said, 'I can't catch it,'" Chaz Rutledge said.

He scrambled to try to move cattle spread out across his 5,000 acres.

"They weren't interested in following the feed pickup, and when the flames came over the hill in the pasture that I was in, I knew it was a futile effort. At that time, there was probably a five-mile-wide head fire and no way to get around it."

A friend met Chaz Rutledge at the ranch headquarters where the family live; they turned on yard sprinklers and faucets.

The house sits down in a valley surrounded by trees and flanked to the north by a creek bed. As the fire approached from the west, there was concern the flames would leap into the tree line and creek bed, igniting potentially tons of fuel and overwhelming the house.

Chaz Rutledge rushed inside to grab a computer and his checkbook. The smoke was so thick outside they could barely see one another even three feet apart, but they could see flames build above a tree line behind the house.

"And, at that point, it was time to go," Chaz Rutledge said.

There was fire as far as the eye could see to the east and south, so the only way to escape was to the west and north. Chaz Rutledge and his friend traveled in a 12-mile circle around the fire in order to find a safe vantage point to get a look at his house.

"I saw vaguely through the smoke that there was still a house standing," he recalled.

Chaz Rutledge returned home to see volunteer firefighters working near his place; they had a 1-ton fire truck with a tanker spreading water along the fence line about 100 yards from the house to the south, keeping the flames from encroaching. A 5-ton truck from Follett, Texas, showed up later, working for hours along the creek bed to keep the fire from moving east.

As the fire approached the Rutledge ranch, it grew to 50-foot flames fueled by 50-mile-per-hour winds; it skipped over county roads and devoured pastures in its path.

"As I was helping them fill up with water here at the pond, and tried to survey what I needed to do -- if there was anything I could do -- we felt an ever-so-slight wind shift out of the north," Chaz Rutledge said.

That subtle wind shift was what the family needed: It steered the fire away from the ranch.

"And it held that fire right at the fence line, and kept it from encroaching further north."

The flames from that fire ravaged 600 to 700 square miles of land, homes, animals and outbuildings across the Texas Panhandle, but wrapped around the Rutledge home and left the place untouched.

"It literally looks like God had just covered us," Lori Rutledge said.

All of the Rudledges' ranch equipment was spared and they were able to save the majority of their privately owned cattle.

Once the fires stopped, however, about 4,600 of the ranch's 5,000 grass acres were lost. About half of the herd they managed was killed. Before the fire, the ranch had about 270 heifers; after the fire, about 130 survived.

That night, Chaz Rutledge located some of his cattle "still literally standing in the fire line" west of his house. He used a tractor to build a fire break there.

About three months after the blaze scorched the pastures, they have turned to bright green. It has brought hope that because the family survived this, just maybe the ranch is meant to be.

"The day after the fire, I was driving around and couldn't think straight," Chaz Rutledge said. "I got a phone call from a land broker out of Amarillo. He had been contacted by an insurance agent in Stratford, Texas. The insurance agent told the land broker, 'You need to call Mr. Rutledge and tell him whatever he needs, money is of no object, it's taken care of without question.' It was essentially a blank check. It's almost like (the ranch) was meant to last."

Of the estimated 4,000 head of cattle lost in the Texas Panhandle, about 2,500 were in Lipscomb County where the Rutledges operate. That March fire is known as the Perryton fire. Wildfires also scorched areas to the south of Canadian in the Shamrock, Texas, region, and back to the west of Shamrock in the Dumas, Texas, area.

Building back herds, regenerating pastures, building fences and other buildings will take several years, if not longer. Along with already-low cattle prices, making a living will be a challenge in the months and years ahead.

"It's definitely thrown us a curveball on a marketing and financial side," Chaz Rutledge said.

"We had small numbers of cattle that we owned and we had taken in on a cow lease, 112 on a per-month, per-head basis. And, after the fire, that is gone. It's going to be a tight, tough, slow rebuilding process. And the calf crop that we are getting on the ground now is critical, very critical, in order for us to be self-sustaining as long as it takes for any of those other opportunities to rebound.

"With the donated feed and the donated hay, we will survive into the fall. Now, if the rain quit next week and we didn't receive any more rain over the summer, the fall will be harsh and the winter would be harsh. If it wasn't for the graciousness of the people that donated, I might be looking for a job."

While they will tell their kids someday about this dangerous fire that threatened their home, the Rutledges also will emphasize their good fortune.

They remain humbled by the outpouring of kindness from strangers.

A woman who showed up at the Rutledge ranch the morning after the fire with sandwiches and water offered a consoling lesson about accepting help.

"A lady at church, she came up to me right after the fires and, of course, I'm crying," Lori Rutledge said. "She put her arms around me and she said, 'Don't take away someone else's blessing 'cause your pride is in your way. You need to remember that God gives and receives, and this is you needing to receive. Be gracious and you will learn something from this, and it's OK to accept help.' That is one of the hardest lessons that I have learned from this is to take some help."

Families in the burnt-out areas experienced a seemingly boundless outpouring from total strangers.

"As bad as the fire was, this whole experience, I will always look back on it with fond memories, because of everything we have learned and people we have met and their generosity," Lori Rutledge said.

One night the Rutledges spent two hours filling out thank-you cards to some of the easily 100 people to remember.

A neighbor offered to let the Rutledge cattle graze their land, essentially donating the ranch, grass and anything they needed.

The Rutledges plan to bring cattle back in June or July. Ranchers in their area are seeing some of the greenest pastures they've seen in ages, thanks to rains since the March wildfires. Chaz Rutledge said if the rains continue, his pastures will recover yet this summer.

The Rutledges received phone calls from neighbors they'd never met before, saying, "I know that we've told you this before and you hear this all the time, but what we have is yours. If you need something, come and get it."

A church in Adrian, Texas, collected funds to send to the family.

The family hosted a Christian group from Tennessee that made its second trip to the region after the fires to bring hay, fencing materials, saddles and feed. Many other strangers have just shown up to the ranch with loads of hay.

"What I tell people now is the fire was very devastating, overwhelming, I felt like an ostrich with my head in the sand for about two weeks afterwards," Chaz Rutledge said.

"But the outpouring of support and donations, and just heartfelt giving and prayers, (was) far more overwhelming in a positive way than the fire ever was," he said.

Maybe even more importantly through all this, Chaz Rutledge said the family made lifelong friends. 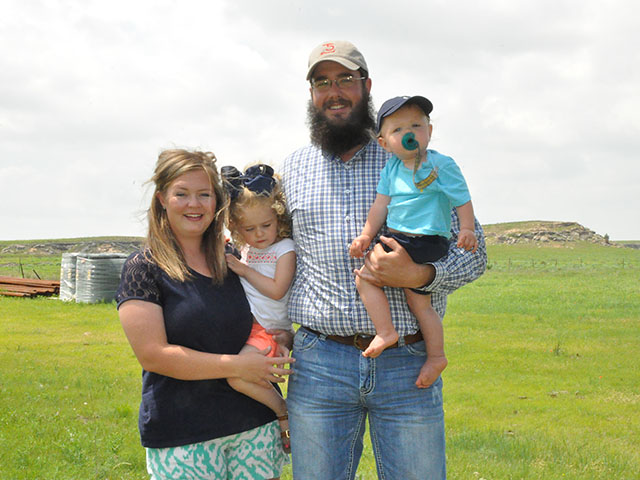