SHAMROCK, Texas (DTN) -- March was a long month for Shamrock, Texas, rancher Trent Cadra. Two separate wildfires destroyed between 1,500 and 1,900 acres of his pasture between March 6 and March 23.

Yet, in just two months, the once-darkened horizon transformed into some of the brightest green pastures Cadra has ever seen.

Those pastures are influencing him to be even more determined to keep them healthy in the future.

His land was ravaged by what is called the East Lefors fire, which consumed ground north and west of Shamrock.

Cadra, his father and his brother run a cow/calf operation; they grow between 800 and 1,000 acres of wheat for grazing and irrigated cotton on their Wheeler County ranch.

"Fortunately enough we were able to shuffle cattle around and get them to wheat pastures ahead of time to get them out of the path of the fire for the most part," he said. "I was able to pick up some lease country for a temporary basis, to give some country time to recoup. That's been trying."

Unlike many ranchers in the region, the blaze largely spared Cadra's animals -- he lost two calves -- but the fires certainly have his family thinking about how to improve pasture management.

"It's just good business to try to be careful and cautious," he said. "We mow or shred most of our ranch rows and feed rows to try to prevent any fire. Try to eliminate at least one fire hazard that way."

Cadra said the fires benefited some of the pastures that had a lot of old dead growth the cattle didn't like to eat.

"Now we've got a bunch of new lush growth coming on. On the other side of that coin, a lot of the native grass country that's short it burned that up, but it kind of takes a long time for that grass to recuperate."

Holloway, who is a lifelong resident of the region, said drought in recent years forced him out of the cattle business.

"This happened on my watch," Holloway said as he choked back tears. "I'm going to do everything within my power to help them."

Better weather also helps. Ranchers across the burned areas in the Panhandle saw anywhere from 12 to 20-plus inches of rain in the weeks following the March 6 fires.

Much of the grass regrowth is replacing lower-quality varieties, burrs, brush and other plants that burned away. Holloway said those ranches will "get a lot of value" from the regrowth.

"This has people's attention," he said.

"For three years I've been preaching to do things to prepare for wildfires and 90% don't listen. That grass was standing gasoline waiting to explode. People are serious now about doing things to protect their property, properly grazing their country."

Ranchers should start "preparing today" for the next wildfires, Holloway said. By all accounts, the Texas Panhandle fires were among the worst in the region's history at a time when the cattle markets are challenging.

For example, as of early June, a 550-pound steer lost about 46% in value from a year ago, Holloway said. You have to go back to 1973 to find a time when producers lost that much equity.

He compared the mindset of wildfires preparation to the price cycles in row cropping. "Farmers turn out a big crop and make a lot of money, buy big John Deere tractors, the next year their corn is hailed out and then they're in trouble," Holloway said.

"You can't farm and ranch like that anymore," if you want to pass along the land to the next generation, he said.

Though the pastures are greening, Holloway said ranchers need patience.

"Because it is so pretty, people are chomping at the bit to get cattle out," he said. "It is a big mistake to do that."

Holloway said if the ranchers don't overgraze their cattle, and get enough rain by the end of this summer or beginning of fall, they can lightly restock their pastures.

Cadra said he has used controlled burns to manage grass and prevent wildfires. Because many of the native grasses burned up, he keeps cattle off new grasses by frequently rotating cattle in and out.

One of the challenges when doing that is Cadra lost seven or eight miles of fencing because of the two fires.

"If you look at the cost of materials and what it costs to put in a fence, I mean you're looking at anywhere $7,500 to $10,000 a mile and, so, that's a pretty large hit to take in a year. We're trying to rotate and do it systematically."

Other ranches in the region are also feeling a big financial hit from the fires that destroyed fences, cattle and other property.

Replacing one mile of fence costs about $10,000, or about $15 million just to replace damaged fencing in the region at a time of depressed cattle markets.

"Ranchers depend on cattle and a lot of people are patching fences to get by," he said.

The wildfires are leading to more discussions on the role of Conservation Reserve Program acres and their impact in the region.

CRP acres can provide extra pasture for ranchers if needed, but it can also be a source of fuel for fires.

"Our county for 30 years has been moving to rangeland and away from cultivation," Holloway said. However, in comparison, the entire Panhandle has seen a reduction in CRP acres, Holloway said.

According to USDA's Farm Service Agency, the counties of Hemphill, Wheeler and Lipscomb where the fires hit hardest have a combined 60,787 acres enrolled in the CRP in 2016, down from 97,828 acres in 2000.

Even though the CRP acres have declined, Cadra said he's concerned CRP acres potentially could become a more significant fire hazard for the region.

"I have very mixed feelings on the CRP thing," he said. "It is a very good program for what it was designed for, letting country rest, but there's also a time where it needs to be used. In a fire situation, it's definitely a safety hazard to have a large amount of fuel just sitting out there waiting."

The fires in March affected less than 10% of those Panhandle CRP acres.

After the fires, the CRP acres were opened up for grazing and became important to help ranch families rebuild their pastures.

"A 10,000-acre ranch lost 9,850 acres," Holloway said. "They shifted their cattle somewhere else. Where CRP acres opened up, we had some shift to some acres outside of our county. That's been helpful."

In the more sandy areas of the Panhandle, Holloway said pasture recovery may take years. In general, before the fires, about two-thirds of Panhandle acres were in "good shape," while maybe one-third were overgrazed, he said.

Holloway said it will take two to five years to fully recover cattle herds and pastures in the Texas Panhandle, "assuming that we have average or above-average rainfall." He said there is a 50-50 chance the region will return to drought conditions this summer. In that case, Holloway said it could take a decade to restock.

Holloway said he believes people are taking real steps to prevent another similar tragedy but remains skeptical about how long it will last.

"People are tender and sensitive, and determined at this point to prevent tragedies in the future," Holloway said.

"What's likely to happen is people will do a good job in prevention next year, but over time it will all fade away. What's happened here is generations live here and people expect these tragedies. People learn to live with drought and wildfires.

"I would say these people are resilient because they're accustomed to these kind of circumstances." 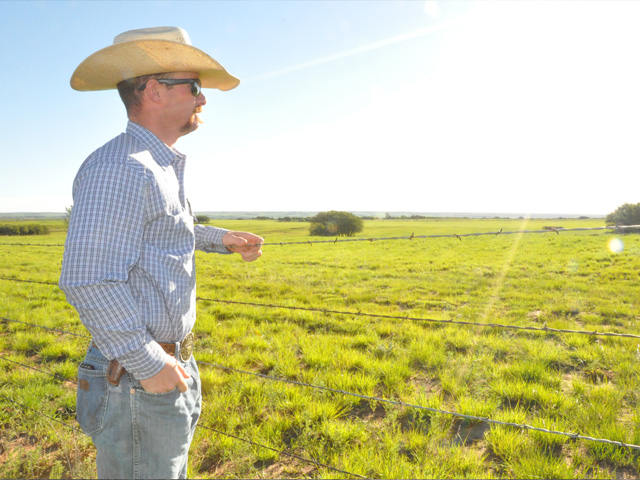