OMAHA (DTN) -- As Southern Plains ranchers scramble to pick up the pieces from wildfires that charred more than 1 million acres and left death and destruction in their wake, farm communities across the country have been coming to the rescue.

Farmers and ranchers in southwest Kansas and the panhandles of Oklahoma and Texas are desperate. For them, the fires were their Hurricane Katrina, but the tragedy received little national media coverage.

Grasslands are destroyed. Fences are gone. Cattle that survived the fires have nowhere to graze, and no fences to keep them contained.

This tragedy has triggered America's ag community to prove there are no boundaries to their support for each other.

Truckloads of round hay bales, fencing materials and other necessities have been streaming south and west on highways from Michigan, Ohio, Illinois, Iowa, Indiana and Missouri.

Winger, who operates a farming, trucking and commercial manure application business in Oxford, Indiana, spent most of last week in the Southern Plains areas affected by massive wildfires. He drove a semi-tractor trailer full of supplies for more than 13 hours March 22 and worked through March 25 tearing out and rebuilding fence near Ashland, Kansas.

Winger was assigned to help a local rancher, about 20 miles north of town. Winger's crew of three people, and another crew of seven, built fences for three days.

"With a crew of 10 guys we built about 2 miles of fences while we were there, but he has, like, 40 miles of fences that needs to be rebuilt," Winger told DTN. "They need much help and a lot of fencing supplies."

The effects of the fire go beyond physical scarring of the land and lost assets.

"We're getting kind of past the anger stage. At this point, they are willing to accept help now. They are grieving a lot. These are their livelihoods. It was the only source of income they had."

One Meade County rancher was able to save 99% of his herd, but lost all of the grassland in southwest Kansas, Sneath said. Right after the fire, the rancher received 14 bales of hay, but that would last only about seven days.

Rains have come in recent days, but it may be next year before grasslands begin to recover.

"This grass will not grow back in one year," Sneath said. "There are places in Kansas that burned where we don't get rainfall to get the grass back. They may have to continue to bring hay. They will have to be supplemented into 2018.

Winger said he was surprised how many structures were damaged. The rancher he helped lost all of his buildings, including his home.

The rancher's cattle were spared by grazing on green wheat dodged by the fires.

When Winger graduated from high school, he had traveled to Coldwater, Kansas, to help harvest wheat; this isn't far from the burned area, so he felt a connection to the region.

"My dad has traveled all around the world helping those in need, and last year we went to Baton Rouge, Louisiana, after that area saw the severe flooding," he said. "I just felt like we needed to help out."

Clearmont, Missouri, resident Bryon Clark has been lending his fence-building skills to the recovery.

Clark, the mayor of Clearmont, a town with a population of 170, works full-time as an electrical and mechanical technician for Buckeye Partners, which operates pipelines in northwestern Missouri. He also operates his own construction and fencing company, and raises goats.

Through an Oklahoma friend, he made contact with Gate, Oklahoma, rancher Eric Bond. Clark spent the weekend of March 17 building fences. While Bond's home was spared, he lost outbuildings, machinery, some cattle and about 90% of fences on his ranch.

Bond had about 30 miles of fence to replace, Clark said.

It may be difficult to fully understand the scale of damage inflicted by the fires without visiting the region, he said.

For example, on part of the first day, Clark helped unload donated hay delivered to the ranch. The challenge? All of the rancher's equipment was burned, so they struggled to find a loader tractor to unload the hay.

The amount of work still to do is "pretty daunting," Clark said.

"The professional level of these people are just amazing. They lost a lot, but they were just happy they survived and were very appreciative of our help."

Clark said his involvement opened his eyes to how much help these people need and will need for many months to come. He said he plans to make another trip to the region in May.

Sneath said the No. 1 priority in the burned-out region of Kansas is to replace fencing.

"At this point we still need feed, but the priority is fencing -- so many miles of fence," she said.

"If you're thinking about spending $20 on feed, you can spend that on T posts. It is unimaginable how much is needed to replace. Nobody can go and fence an entire fence. It takes $10,000 to build one mile. Some producers have to replace 20 miles."

Farmers need T posts 6 feet long and 1.33 pounds per foot, to comply with a variety of government programs. There is a need for wood fence posts from 3-inch to 8-inch diameter and treated in creosote, as well as 12-gauge barbed wire, Sneath said.

While most of the truckloads of hay from other states are being sent to the Ashland, Kansas, area, east of Meade County, she said her focus has been to direct some of those supplies to her producers who live a distance from the supply point.

Sneath spends most of her days checking on county farmers, many who are staunchly independent and hesitant to ask for help.

"A lot of times they turn down help," she said, "but they may give us a hint of how we can help."

Since loads of hay and other materials began pouring into southwest Kansas, Sneath said she has received about 50 truckloads and has worked around the clock distributing the hay and materials where they are needed most.

Between 3,000 and 5,000 head of cattle have been lost in the Kansas wildfires. Many of the animals that did survive are left in bare and blackened pastures, so the need for feed and health monitoring on those herds will continue.

"There were guys who said 'I don't need hay, I need bullets,'" Sneath said.

"We want to thank anybody and everybody. I know we will pay it forward someday. It has been an overwhelming outpouring to these producers."

More than 700,000 acres burned in Kansas alone in 21 counties. In Oklahoma, the number is estimated at around 310,000, according to Oklahoma State University Cooperative Extension, including about 3,000 head of cattle and 6,000 hogs. In the Texas Panhandle, an estimated 540,000 acres were charred, and more than 2,500 head of cattle and 1,900 hogs were killed, according to Texas A&M AgriLife Extension Service. The numbers could change.

Recent rains in areas of Kansas and Oklahoma have helped to ease concerns about more fires popping up.

Farmers from other states have responded by shipping thousands of bales of hay to the burnt areas.

Twitter has been exploding with photos of waves of semi-tractor trailers traveling highways headed south. Local FFA and 4-H clubs from around the Midwest have provided relief in a number of ways.

Fairmount, Illinois, farmer Vern Rohrscheib and his daughter Lynn organized hay deliveries of 300 to 400 bales on about 13 semis to the Ashland, Kansas, area March 30. The number of bales donated, however, is somewhere around 600 to 700. Now it's a matter of finding enough trucks.

"Some of the trailers are pretty big," Rohrscheib said. "If we can get trailers, we'll be sending them. The one thing I've got out of it is we've had no negative comments on it. It's just been, 'What can we do to help?' We kind of scoured the country looking for trailers. If the need continues, if they don't get grass, maybe we'll make another run.

So far they're finding plenty of semis and hay.

Farmers from across the Midwest understand how dire the situation is when grasslands are virtually erased.

"We know what's left," Rohrscheib said. "There's animals out there that gotta be fed until the grass greens up. Sounds like the area is getting rain, so the grass will recover."

The Oklahoman in Oklahoma City reported March 30 that nearly $500,000 had been donated to the Oklahoma Cattlemen's Foundation. See http://bit.ly/….

In Texas, the Texas Farm Bureau has established a relief fund. More information can be found at http://bit.ly/….

In the Texas Panhandle, donation collection points have been closed because needs are being met.

A group of farmers in Michigan's Upper Peninsula have teamed up with a group of seven independent truck drivers to deliver loads of hay, fencing materials and other supplies to the Texas Panhandle this weekend. See http://bit.ly/….

In Kansas, donations can be made to Meade County Economic Development to the Meade County Eco Devo in care of Elly Sneath/Fencing Supplies, P.O. Box 369 Meade, KS 67864. Gloves, wires, corner posts and steel posts are needed. 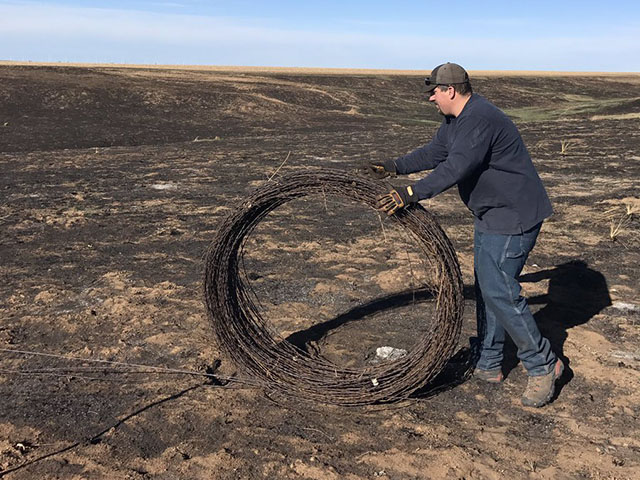