Despite rainfall in the days following the March 6 wildfires, a persistently strong Texas Panhandle wind stirred up black soot and dust, leaving some ranchers a bit on edge.

The blaze incinerated pastures as far as the eye could see.

However, as the weeks passed after the fire, consistent rains through May began to paint a new picture.

By mid-May, there was little sign on the land of the ravaging flames that burned about 325,000 acres of pasture in the region. The horizon was as green as ever, providing hope, although it may take years for the pastures to regain the losses.

The cattle carcasses that lie in green grass along a fence line east of Rader's stone ranch house near Canadian, Texas, serve as a stark reminder of why the region was among the last to be settled in the United States in the 1800s.

Texas Panhandle ranchers are at the mercy of some of the most dangerous elements in the country.

"I was kind of arrogant about our great grass," Rader said. "Well, it's a problem when it's caught on fire. We had more grass than we used to have when I was growing up. It sure turned into a problem. We may need to manage it a little, maybe. We had a lot of fuel."

The fires killed about 85 of his 520-head cattle operation, and wiped away about 60% of his pastures. In all, about 13 miles of fencing were destroyed.

"We've got about three miles built, and we've been real steady and going," he said.

"We're still moving our cows around. People were so generous and let us bring our cows to them. We had to move about 300 cows. They were all having babies or getting ready to have babies. We had to pair up everything, get them in little groups and haul them off. Been kind of a mess.

"It won't be a good year, like a friend of us told us. But the generosity of people, the programs we have, we'll all be made whole. In three years, we're going to lose a year and a half of production. There's no way around that."

Rader has been doing a juggling act, moving animals to wheat pastures, utilizing Conservation Reserve Program ground and feeding donated hay bales. He's hopeful he can begin to move his cattle back to burned pasture ground by August. Even then, he'll need to control how much grazing occurs as the grasses continue to rebuild.

"I think it's going to be a three-year process to come back, and that may be even optimistic at that," Rader said.

The stories of heroism and generosity following the fires are enough to fill a book.

Steve and his wife, Linda, said they've come to lean harder on their faith and count the many ways they've been fortunate.

"Some of the first people who came were from Seminole, Texas, and they said 'We're coming, we don't care what you say,'" he said.

"And they came up and helped us roll up some fence. It was just a real boost for morale."

The fire was so spread out that area volunteer fire departments were unable to focus efforts on individual ranches, he said. Nearby neighbors helped squelch fires around the ranch, and did all they could to save animals.

Fire-related fatalities in Texas provide perspective for many ranch families.

"Really, after we heard four people died in the fire, we stood back and realized there's a lot more people who had been damaged," Rader said.

"Our son and daughter-in-law were out on horses with the cattle. That wasn't a good place to be. It could have been very bad, and they had a new baby. There could have been a lot more serious injuries."

Case in point: Although a trailer sitting beside a diesel tank on the homestead was destroyed by fire, the tank was left undamaged.

The winds sprayed embers into the front yard of the Raders' house, inflicted damage to trees, bushes and shrubs, but the house never caught fire.

"People have donated cattle," Rader said. "My nephew gave me some heifers, a trailer. Yeah, we're OK. We just got to build back and keep coming. It will be better than it was. This country was made for fire. It's part of the history. We need to remember that and try to get along with it.

"Fire can be a cleansing thing. It's however we accept it. Make the best of it," he said.

Dusty Witcher was working in Canadian, Texas, on March 6 when she caught word of a towering inferno building in from the west. Her husband, David, texted a message from his tractor while he was plowing a fire break on their Hemphill County ranch east of Canadian.

As she drove home on Texas Highway 60, law enforcement officers already were shutting down traffic between town and the Witcher ranch.

When she arrived on the ranch, fires closely approached and she noticed a group of bulls and horses trying to escape the blaze through a fence. The fire had traveled about 70 miles an hour from where it started to the west.

"They knew the fire was coming," she said, fighting back tears, "so I tried to help them. I tried to tear the fence down, but I was in my car and I couldn't get it tore down. I kept thinking somebody will come by and help me, but the road was shut down, so I come on home and started loading stuff we might need. The fire was just coming across here so fast. We left and we cut fences as we left, and we didn't know if we'd have anything when we came back."

The so-called Perryton, Texas, fire started north and west of Canadian and traveled east toward Higgins on the Texas/Oklahoma border.

David Witcher said he could see the flames quickly approaching, fueled by winds in excess of 50 mph.

As the Witchers escaped the fires, they hoped those cut fences would give animals a chance to flee.

Their operation can include up to 200 heifers at a time, but averages around 150 of a mix between their own cattle and other ranchers' animals.

The next morning, David Witcher checked on a property he operates near the Oklahoma border; the night before, as he watched the fire on the horizon there, it had appeared it could be a total loss. Luckily, the fire managed to mostly spare that pasture.

"The only land that didn't burn out of our seven sections was a small strip along the creek," Dusty Witcher said. "It burned parts of this section. That was where we were able to put our remaining cattle after the fire. We were forced to ship out most of the cattle."

Another valuable piece of land also was spared: The Witchers had enough of a fire break to push the fire in a circle around their house.

With grasses greening, there is hope.

David Witcher said he's going to take his time in building back his herd.

As has been the case for most Texas ranchers hit by the fires, the Witchers received numerous hay donations, fencing materials, and money from friends, family and local fire funds. In all, they lost more than seven sections of pasture land, all of their fences and a small hay shed.

"It's amazing. You couldn't believe that it was so big. I think we have more hay than we do animals. It's just amazing. People never cease to amaze me. These donations, they mean so much more than people even realize." 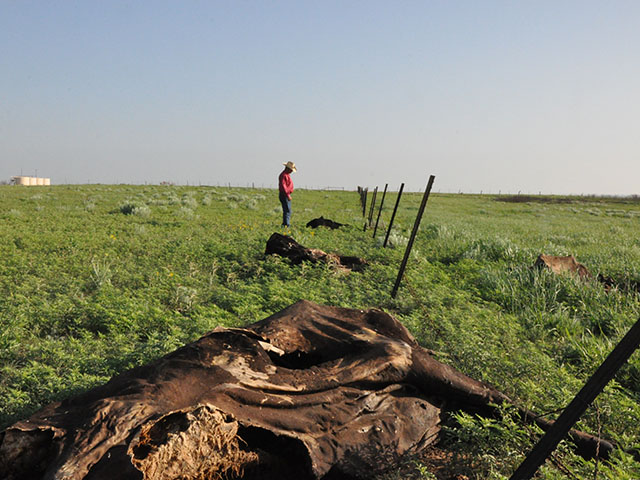