OMAHA (DTN) -- Each year, DTN publishes our choices for the top 10 ag news stories of the year, as selected by DTN analysts, editors and reporters. Today, we complete the countdown with No. 1: the new coronavirus and how the resulting pandemic changed our lives.

One of my favorite movie lines comes from the opening of the Vietnam War classic "Platoon" where the lead character, also named Chris, noted, "Somebody once wrote, 'Hell is the impossibility of reason.'"

That quote popped into my head over and over in 2020. So many times over the past nine months, it felt like we were fighting against each other more than the coronavirus.

On March 4, I was returning from the National Farmers Union convention in Savannah, Georgia, a city I had never been to before, but I had enjoyed the event right along the Savannah River with cargo vessels often passing by the hotel. I had toured the port while I was there, stocking up on new photos of container vessels while writing an article about how poultry exports out of Savannah were growing since China had lifted restrictions on U.S. poultry at the beginning of the year.

A few days earlier, we had gotten an article out of China that most of the country remained in a lockdown. The coronavirus outbreak in China had forced poultry companies to rush chickens to slaughter, and billions of eggs were piling up on farms. Much of the feed industry in the country had shut down. Day-old breeding chicks were being euthanized because they could not be shipped to farmers. We were now calling it "COVID-19."

Our article noted, "So far, the coronavirus had infected more than 74,000 people and killed more than 2,000 in China. It also spread out in many countries, including the U.S. and Canada."

At a food court in the Charlotte, North Carolina, airport waiting for my connection, the cashier at Bojangles told me he liked my new Kansas City Chiefs Super Bowl hat. I told him I really liked it too. I saw just a handful of people wearing masks because we were hearing a lot more about the spread of the coronavirus. Then, my editor Greg Horstmeier called and said the DTN newsroom was basically shutting down travel when I got back.

That seems like both just yesterday and a decade ago all at the same time.

It was about a week later when the black swan swooped in and quickly put a hold on daily American life, crashing commodity and stock markets as a result. DTN Lead Analyst Todd Hultman described it as a "bloodbath of red across the entire commodity board."

Soybeans started falling more than a dime a day, and cattle fell limit down. Oil prices and stocks tumbled quickly. The Dow Jones Industrial Average had been approaching 30,000 points just a month earlier, but by March 12, it had fallen to 21,200 points -- seeing the largest single-day decline since 1987. The Federal Reserve was adding $1.5 trillion to help fund banks.

We shut down. Schools closed and business meetings were suspended "out of an abundance of caution and concern ..."

We were told initially this would all be over by Easter. Those of us who are realists knew that dog wouldn't hunt. While the country was supposedly in lockdown, there were so many exclusions even pro wrestlers were classified as "essential."

Give credit where credit is due. The National Pork Producers Council was the first industry group to sound the alarm about the risk that packing plants could shut down. The group was worried about supply chain issues for pork producers if workers had to stay at home to take care of their kids who were out school. Nobody was talking much about the care of essential workers at that moment. But hand sanitizer disappeared from shelves. Who knew toilet paper would become a critical commodity?

Almost immediately, grocery stores had to put limits on people to keep them from hoarding groceries as well.

Still, COVID-19 was a California problem or a New York problem. This is what happens when you live in a city of 8 million people. Florida beaches were still open for kids on extended spring break even as the Centers for Disease Control was telling us to stop gatherings of more than 50 people. Somewhere along the way, that number would fall to 10 people or fewer.

Even though this was a big-city problem, rural hospitals were at risk. As DTN reported, rural America had seen 126 hospitals close during the past decade and were continuing to close. We noted, "If there is a hospital bed surge, and it's not treated properly, then staff also get infected. The crisis could get out of control very quickly in rural communities."

Early in my journalism career, this crusty old editor from Birmingham (Alabama) News named Clarke Stallworth gave a newswriting class when I was a reporter at the Quincy, (Illinois) Herald-Whig. He said the most important question for a journalist to answer is simple: What does this story mean to the reader?

When COVID-19 started showing up in packing plants across the country, that basically meant livestock and poultry producers lost their markets.

Packing plant closures caused cattle markets to crash even as meat packers raised prices on retailers. By mid-April, pork producers were seeing a backup of hog supplies and were pointing to potentially $5 billion in losses for the year. It reached a point that pork producers started euthanizing hogs.

It was hard to keep up with all of the coronavirus cases at packing plants in early April. Tyson Foods started suspending operations in pork plants such as in Columbus Junction, Iowa. JBS SA saw high cases in Grand Island, Nebraska, and Greeley, Colorado. Pilgrim's Pride, also owned by JBS, saw workers protesting outside their plants over safety concerns. Several poultry plants in Georgia were hit hard as well.

On Easter, Smithfield Foods was closing its pork plant in Sioux Falls, South Dakota, after more than 200 people became sick. Within a few days, 640 people were sick. One packing plant became the biggest hotspot for coronavirus cases in the country. Before the wave was over, that Smithfield would have 1,294 reported cases involving workers as well as hundreds more of their family and friends.

Shelves went bare for a short time, mainly because packers used to packaging meat for restaurants or schools weren't set up to shift over to retail. The same problem hit milk supply chains. President Donald Trump got directly involved, declaring packing plants as "critical infrastructure" under the Defense Production Act.

Packers reaped a windfall at the expense of livestock producers. Boxed beef cut-out values hit $4.75 a pound for Choice and $4.50 for Select in early May. Before then, the record boxed-beef price was $2.65 a pound in 2015.

"There are sale-barn guys who have been in the industry 30 or 40 years who said they never imagined a day would come when boxed-beef prices were over $4," ShayLe Stewart, DTN's livestock market analyst, told me in early May. "It's unfathomable. It's unprecedented."

Meanwhile, live cattle futures were hitting 18-year lows. At least 11 state attorneys general called for investigations into market concentration and possible manipulation. USDA would eventually put out a report on market volatility and cattle markets stating the department could not find any violations of the Packers and Stockyards Act. The lobby group for packers would put out a news release noting it was economically justifiable for packers to take advantage of market conditions by buying cattle at low prices and selling meat at high prices.

Congress didn't hold any hearings on these issues despite multiple bills calling for changes in cattle markets.

We reached a point where some state and local health officials in Iowa, Nebraska and other states stopped providing information about infections at individual packing plants.

Leah Douglas of the Food and Environment Reporting Network kept the best tally on cases, showing more than 550 packing plants nationally had outbreaks, infecting more than 50,000 workers and killing at least 255 workers.

The Occupational Safety and Health Administration (OSHA) never responded to my emails asking for commentary on the situation. OSHA eventually fined Smithfield $13,494 for failing to protect its workers in Sioux Falls. JBS was fined $15,615 for the same situation in Greeley. In comparison, OSHA had fined Dollar Tree Stores $477,089 earlier in the year because exits at its stores were blocked and the company had failed to maintain fire extinguishers. The lobbying group for packers still put out a news release complaining about the fines.

In August, the Nebraska Legislature became the first state in the country to hold a hearing on the toll taken by meatpacking workers. A lot of people at the hearing were young adults, telling the stories of their parents who had gotten sick. I met Christian Munoz who brought a portrait of his dad, Rogelio Munoz Calderon, who had worked for 27 years for Tyson Foods in Dakota City, Nebraska. Rogelio finally became a U.S. citizen in March. He died of COVID-19 in May at age 52 -- the same age as me.

STAYING IN MY LANE

Covering agriculture, I didn't have to deal as much with the political fights over wearing masks, even though we had a billboard in Omaha explaining masks were just a plot to take away our freedom. I didn't have to report on idiotic plots to kidnap a governor, or about President Trump telling Bob Woodward in early February that the coronavirus is "more deadly than even your strenuous flus" even as he spent months downplaying the virus.

Despite the sunny spin from USDA about its Farmers to Families Food Box program, we constantly saw images of miles-long lines of cars waiting to get those food boxes. Those photos were the modern equivalent of the 1930s bread lines. What about the people who couldn't wait in line, or didn't have a car, I wondered?

Commodities overall started moving into a recovery in the second half of 2020, even as rural America overtook the cities for COVID-19 cases. Cash corn hit $4.16 a bushel and soybeans at $11.56 on average after harvest. Feeder calves and live cattle are up since October, as are dairy prices.

We went from warning people about Easter to warning them about Thanksgiving and Christmas. Sometime around early September, cases in small towns and smaller cities started overtaking the large metros. My parents got sick but thank God didn't have to go to the hospital. A friend of my wife's recently died after being put on a ventilator.

While a support package has passed Congress and was eventually signed by the president, as I write this, there is still debate over what funds will be given to workers. The legislation included $600 payments to individuals.

Vaccines are on the way. It is truly a scientific breakthrough that U.S. ingenuity has created multiple vaccines in a matter of months. But no one should be taking victory laps.

Rural America continues struggling with the coronavirus. In Iowa alone, more than two-thirds of the state's 279,000 cases have come since Nov. 1. Other states such as North Dakota have seen their fatalities more than double over that same time.

We're going to put 2020 behind us, but it will leave a lasting scar. 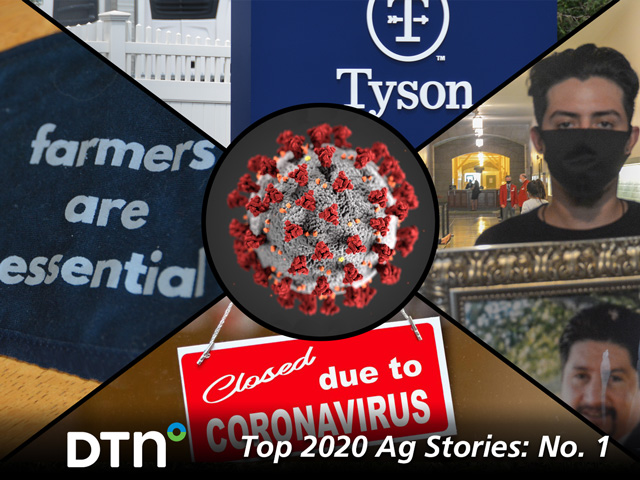