OMAHA (DTN) -- Each year, DTN publishes our choices for the top 10 ag news stories of the year, as selected by DTN analysts, editors and reporters. On Dec. 17, we looked at some of the runners-up for this year. Today, we begin the countdown with No. 10 looking at how the COVID-19 pandemic highlighted the lack of broadband internet service in some less-populated regions of the country and drove changes to make rural residents more connected.

The COVID-19 pandemic closed most schools and many workplaces in mid-March 2020, forcing children and workers to learn and work from home. For those in rural areas without access to broadband (high-speed) internet, this transition was filled with inconsistent service and many trips to wherever a decent internet signal could be found. See more here: (https://www.dtnpf.com/….

For years, the nation's rural areas were a tale of two situations. Some places had broadband service while others did not.

In regions where broadband is found, farmers and ag businesses conduct business regularly. In 2020, broadband allowed kids to learn and workers to work from home.

However, in areas not served by strong internet, the move to remote learning/working was an enormous burden on rural families.

School children in these areas had to improvise to find a decent internet signal. Many had to go in search of internet, whether that meant a local restaurant or school parking lot with Wi-Fi service or the top of the next hill to get a better signal. See more here: https://www.dtnpf.com/….

Farmers, and often their spouses, also struggled to find consistent internet they needed to run their businesses and work from home.

There were stories of utilizing the internet during overnight hours to avoid the slower speeds in the morning when everyone else logged on. Much like the school kids, farmers had to conduct business from the cab of their pickups on top of hills to assure connectivity.

High-speed internet accessibility is expanding. The Pew Research Center conducted a survey in early 2019 and found 63% of rural residents said they had a broadband internet connection at their home, which was up from 37% in 2007. See more here: https://www.pewresearch.org/….

However, rural areas still lagged behind their urban and suburban counterparts. People who live in rural areas are 12 percentage points less likely to have broadband then people in urban areas; in 2007, there was a 16-percentage-point gap between rural (35%) and all U.S. adults (51%).

Those in rural areas often face a higher price tag for their rural broadband internet service. Farmer Michelle Jones, of Broadview, Montana, a past president of the Montana Grain Growers Association, said she pays $140 per month for 50 megabits per second (mbps) of download speed while those in a nearby town receive 200 mbps service and pay about $50 per month.

Still, she was grateful for her local phone company for investing in rural broadband in her region of south-central Montana. See more here: https://www.dtnpf.com/….

For many rural communications companies, the only way they can expand service in rural areas is by applying for federal loans and grants.

In December 2019, USDA announced a second round of the USDA ReConnect Pilot Program (https://www.usda.gov/…). In this round, USDA made up to $200 million available for grants, 50-50 grant-loan combinations and low-interest loans toward the costs of rural broadband.

By Dec. 17, it was announced online "As of now, USDA is investing in 84 projects through the second round of the ReConnect Program. The investments represent $655,179,473 in grant and loan funding for high-speed broadband infrastructure. The funded service areas include a total of 107,587 households (https://www.usda.gov/…).

USDA is reviewing applications and announcing approved projects on a rolling basis. Additional investments will be made in the coming weeks.

Another possible source to boost rural broadband would be a federal infrastructure bill. This would invest billions of dollars into the nation's highways, bridges and locks and dams but also into building broadband internet structures in areas not currently being served.

This investment, however, is yet to happen.

President-elect Joe Biden ran and won the presidency on a plan called Build Back Better (https://joebiden.com/…). Infrastructure, which includes universal broadband, would be among the areas to be improved.

A possible silver lining to a worldwide pandemic is it highlighted the many shortcomings with rural internet service. The lack of available internet in many rural areas during a pandemic might just be what finally pushes the federal government to invest in rural internet, according to some. See more here: https://www.dtnpf.com/…. 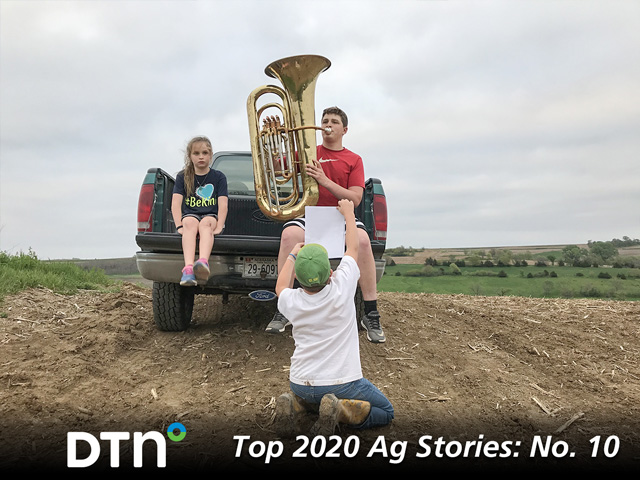