OMAHA (DTN) -- If you're like most families, after you've finished feasting on turkey, ham or prime rib and all the fixings for Thanksgiving or Christmas dinner, you still have plenty of food left over to enjoy the next few days.

Here at DTN, we too had a generous helping of leftovers after we finished preparing our annual Top 10 Ag Stories list.

This year's feast of news events was a bountiful one, with numerous topics to feed our top 10 list, such as the coronavirus pandemic that touched nearly every aspect of our lives, a presidential election that drew record voter turnout, and severe weather events that took a toll on crops and bins in various parts of the country. We'll be revealing our top 10 picks over the next couple weeks, beginning with No. 10 on Dec. 18, and culminating with No. 1 on Dec. 31.

But, first, we'd like to share with you, our readers, some of the morsels that were left over after we finished filling our top 10 plate this year. We're serving them up here in what we call the "Best of the Rest" list, in no particular order:

Weeds and insects continued their steady march of resistance to pesticides in 2020. Dicamba and 2,4-D over-the-top herbicides were some of the newest targets of this phenomenon. "Everyone should be more concerned about losing dicamba and 2,4-D to Charles Darwin's theory," warned University of Tennessee weed scientist Larry Steckel in a university newsletter this summer. "Weeds developing herbicide resistance has caused the loss of many more herbicides than anything a court or the EPA has ever done."

This summer, Steckel and his colleagues confirmed dicamba-resistant Tennessee Palmer amaranth populations, which appear able to tolerate 2,4-D applications, as well. Midwest scientists are busy screening waterhemp populations for the same suspected problems. In the meantime, other types of resistance, such as glyphosate-resistance, PPO-resistance and HPPD-resistance, continued to plague growers across the Soybean Belt. The increase of glyphosate-resistant grasses in the southern U.S., such as junglerice, remained another fast-growing concern.

Not to be outpaced, insects are chewing through some common agricultural tools, as well. Insecticide resistance remains a growing concern in insects such as soybean aphids, tarnished plant bugs and thrips. Bt resistance also continued to evolve this year. This summer, Corteva Agriscience confirmed its second report of western corn rootworm resistance to Cry34/35Ab1, the Herculex RW trait that is the underpinning of most pyramided rootworm hybrids.

Meanwhile, Bt resistance in above-ground insects has reached such heights that EPA rolled out an ambitious new resistance mitigation plan that proposes some drastic measures, such as phasing out dozens of current Bt corn hybrids with compromised Bt traits. The goal is to preserve the efficacy of Vip3A, the lone Bt trait on the market without documented resistance in troublesome targeted insects such as corn earworm and fall armyworm.

Here are a few examples:

-- Sabanto, a Chicago-based robotic farming company, hired out three driverless Kubota M5660SU tractors this year to plant and do tillage work for farmers primarily in the Midwest. The 60 horsepower fully autonomous tractors worked simultaneously -- often running nonstop for 40 hours -- to seed and till thousands of acres, a step up from its first year in operation. "This is the real deal ... it will change agriculture," said Sabanto co-owner Craig Rupp.

-- Robotic soil sampling is growing in popularity among farmers due to the precision that soil cores are taken to get more accurate tests. One company, Rogo Ag of Wolcott, Indiana, has several autonomous and semi-autonomous samplers for hire. In the fall of 2020, the company projected it would sample 350,000 acres, up more than three-fold from 2018. "It's amazing what you can learn (and save) when you get more consistent soil fertility data," said Robo co-founder and CEO Troy Fiechter.

-- Raven Autonomy showed off the Dot Power Platform at the 2020 Farm Progress Show in Boone, Iowa. It's the world's largest autonomous agricultural robot. It can seed small grains, spray weeds and apply dry fertilizer on its own per missions loaded into its computer. Commercial launch for Dot and three Dot-ready implements is set for the middle of next year. "We see the farm of the future being both manned and unmanned," said Wade Robey, executive director of Raven Autonomy.

It was the end of an era on Aug. 14 when the 139-year-old member-owned Minneapolis Grain Exchange (MGEX) announced that Miami International Holdings (MIH), the parent holding company of the MIAX Exchange Group, would acquire MGEX for a combination of cash and MIH common stock. This followed a demutualization of MGEX by its members.

As a result of the acquisition, MGEX became a wholly owned subsidiary of MIH. MIH said it would continue to maintain the trading and clearing operations of MGEX, including its hard red spring wheat contract, while adding new futures products. On Dec. 4, 2020, MIH announced the completion of its acquisition of MGEX for a combination of cash and MIH common stock.

Since the last "floor" trade made on Dec. 19, 2008, when the trading floor was closed as the MGEX shifted to an all-electronic futures trading platform, the exchange remained a standalone entity with more than 400 seats.

MGEX historically concentrated on trading in agricultural products, with the principal market being hard red spring wheat contracts. In the early days, farmers would bring their own wheat in to sell to waiting buyers, and farm trucks would be lined up outside around the Grain Exchange.

That practice continues as the spring wheat spot cash market, with elevators around the Midwest loading cars or trainloads of wheat and sending samples to be graded and inspected by mill and export buyers to purchase. The USDA Agricultural Marketing Service, Minneapolis, Minnesota, reports the daily spot trades, and it is expected that this important cash market will continue even after the merger.

ClearFlame Engines CEO B.J. Johnson delivered good news to the ethanol industry at the National Ethanol Conference in Houston in February when he announced his company is developing a diesel engine that can run almost entirely on ethanol. The current model the company is testing can run on 98% ethanol straight off the rack or even on E85 so long as the fuel is close to 85% ethanol.

ClearFlame is working with Cummins Inc. and Argonne National Laboratory to develop the technology. The engine is currently in the demonstration phase of development, and Johnson estimated the company has about two to three years of demonstrations to complete, starting in 2021. ClearFlame plans to scale up the technology in 2026 or 2027 and hopes to sign a license agreement with an engine manufacturer.

Farmer plaintiffs found by a court to have suffered damages from Syngenta's Agrisure Viptera and Duracade corn traits sales to several countries without import approvals, including China, started receiving payments from the court as part of a $1.5 billion settlement.

On Feb. 28, 2020, a judge in the U.S. District Court for the District of Kansas in Kansas City approved interim payments to eligible corn growers, grain-handling facilities and ethanol plants.

The final round of payments were expected to arrive in mailboxes between December 2020 and February 2021 on 194,186 claims totaling about $390 million.

The U.S. Department of Transportation's Federal Motor Carrier Safety Administration (FMCSA) trucking hours of service (HOS) rule has been in the news for several years as the agency tried to fine-tune the rule in hopes of easing some restrictions for the trucking industry.

On May 14, 2020, the FMCSA published a final rule updating HOS rules to increase safety on America's roadways by updating existing regulations for commercial motor vehicle (CMV) drivers, according to a news release.

First adopted in 1937, FMCSA's hours of service (HOS) rules specify the permitted operating hours of commercial motor vehicle drivers (CMV). In 2018, FMCSA authored an advanced notice of proposed rulemaking (ANPRM) to receive public comment on portions of the HOS rules to alleviate unnecessary burdens placed on drivers while maintaining safety on U.S. highways and roads, the FMCSA noted on its website.

FMCSA's final rule is crafted to improve safety on the nation's roadways and was clear that rule changes do not increase driving time and will continue to prevent CMV operators from driving for more than eight consecutive hours without at least a 30-minute break. One of the most significant parts of the new rule allows drivers to split their daily required 10-hour off-duty time into segments longer than the current eight- and two-hour split.

After many petitions requesting a stay of implementation of the HOS final rule were denied by the FMCSA as of Aug. 27, the new and final revisions to the still contentious HOS rule became law on Sept. 29, 2020.

The Illinois Waterway, which provides a navigable connection between Lake Michigan and the Mississippi River, includes eight lock and dam sites that are long overdue for significant repairs. In order to facilitate repairs, the U.S. Army Corps of Engineers (USACE/Corps) Rock Island District developed a consolidated repair schedule that included a short closure to locks in 2019, followed by an extended closure in 2020.

The closures took place simultaneously to reduce the impact to commercial navigation as much as possible, but in the near-four-month closure, no vessel traffic was allowed through the affected locks, meaning barges that normally carry commodities through those locks were at a standstill. The repairs were scheduled by the Corps during July through October to avoid spring flooding and to eliminate an impact during harvest season when barge traffic is heaviest.

No vessel traffic was allowed through the affected locks, which meant that the many businesses relying on barge transportation on the Illinois River were on hold during that time unless they used other, more expensive modes of transportation. Barges heading down the Illinois deliver corn, soybeans, ethanol and other products mainly to the Gulf after meeting up with the Mississippi River near Grafton, Illinois. Many businesses saw an increase in transportation costs to move product by rail or truck, with Kinder Morgan's Argo, Illinois, terminal one of many affected by the closure.

Finally, on Oct. 29, the USACE made the long-awaited announcement: "With construction coming to an end at Dresden Island, Starved Rock and Marseilles locks, the Illinois Waterway lock and dam system is open for navigation," said USACE. "Five locks on the Illinois Waterway had been closed since early July in order to perform critical maintenance. Peoria Lock was the first to reopen on Sept. 28 followed by LaGrange Lock on Oct. 13." The next extensive closure is scheduled for four Lock and Dams during the summer of 2023 for 90 to 120 days. 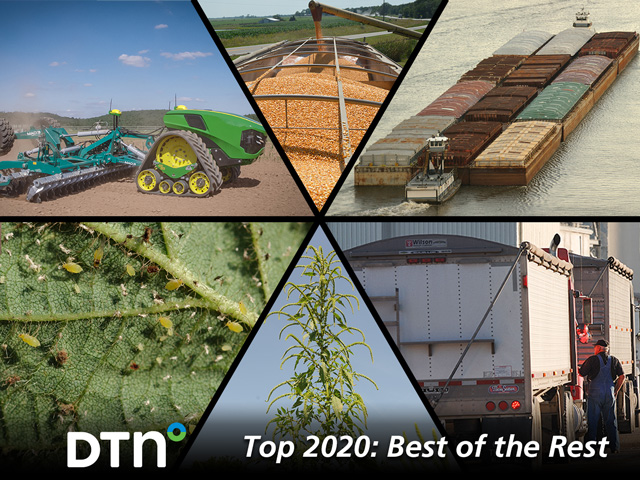