ROCKVILLE, Md. (DTN) -- Each year, DTN publishes our choices for the top 10 ag news stories of the year, as selected by DTN analysts, editors and reporters. Today, we continue the countdown with No. 7, looking at the legal tug-of-war that dicamba herbicides are going through. EPA re-registered dicamba herbicides that were tossed out by a federal judge this summer, but the legal fight is sure to continue into 2021.

The long-simmering controversy over the use of dicamba herbicides on dicamba-tolerant crops reached its boiling point in the summer of 2020, with a court decision that shocked the agricultural industry and may have longstanding ramifications for future use of the chemical.

On June 3, the U.S. Court of Appeals for the Ninth Circuit dropped an unprecedented ruling vacating three dicamba registrations -- XtendiMax, Engenia and FeXapan -- in the middle of the spray season. The court took the unusual step of making the order effective immediately, which forced EPA to rush a cancellation order for the three herbicides out to the public five days later.

The ruling was in response to a lawsuit, originally filed against EPA in 2017, by a coalition of farming and environmental groups: National Family Farm Coalition, Center for Food Safety, Center for Biological Diversity and Pesticide Action Network. The Ninth Circuit judges landed firmly on the side of the plaintiffs' arguments that dicamba herbicides were improperly registered by EPA and rebuked the federal agency for failing to consider multiple environmental, social and economic risks from increased dicamba use. See more here: https://www.dtnpf.com/….

The ruling threw the industry into confusion overnight; some state officials ordered a halt to all dicamba use, while others insisted the products were still legal in their state. EPA ultimately issued a cancellation order that permitted farmers and some applicators with existing stocks in hand to finish out the spray season.

A fierce, months-long legal battle ensued, as the plaintiffs sought to ban this continued use, and dicamba registrants Bayer, Corteva and BASF fought to appeal the ruling.

When, by late summer, those companies had exhausted most of their legal options, attention turned to EPA, which was weighing new registrations for Xtendimax and Engenia, as well as a third dicamba herbicide, Tavium. In late October, the agency announced new five-year registrations for all three, with some additional restrictions on the labels. Corteva is expected to seek EPA registration of a fourth dicamba herbicide, FeXapan, as well. See more here: https://www.dtnpf.com/… and here: https://www.dtnpf.com/….

But the legal drama was far from over. Tucked into its new registration decision on dicamba was an EPA decision to end states' use of Section 24(c) special local needs labels to further restrict federal pesticides -- a popular option used by many states in the past four years to mitigate dicamba injury complaints. As of press time, at least three states -- Arkansas, Illinois and Indiana -- are working to find other ways to further restrict dicamba use in their states in 2021. See more here: https://www.dtnpf.com/… and here: https://www.dtnpf.com/….

So, what lies ahead for dicamba use, after this 2020 rollercoaster ride?

To start, the incoming Biden administration and new leadership at EPA may add some uncertainty to how the agency will oversee and manage the herbicide in the next four years.

What is certain, however, is that legal battles over dicamba use will continue into 2021 and beyond.

"Less than six months ago, the Ninth Circuit resoundingly rejected Monsanto's and EPA's arguments about this pesticide, detailing its substantial drift harms," said George Kimbrell, legal director of Center for Food Safety, one of the lawsuit's plaintiff attorneys. "Rather than do what the law and science requires, the Trump administration has again unlawfully promoted pesticide corporations' profits over protecting the interests of farmers or the environment. So, they are getting what they deserve this holiday season: coal in their stockings and a federal lawsuit." 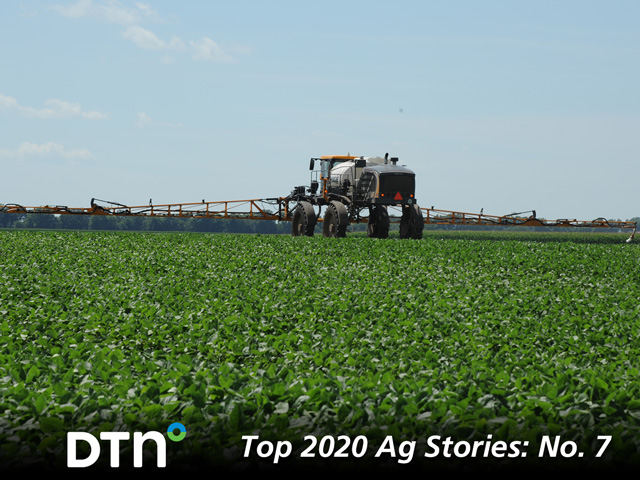