ROCKVILLE, Md. (DTN) -- As July gets underway, state regulators, weed scientists, agronomists and farmers are reporting off-target dicamba injury to crops and plants for the fifth summer in a row.

This year, some of the most widespread symptomology and crop injury is being reported in Iowa, where scientists told DTN that weather conditions, court rulings and planting dates combined into a "perfect storm" to produce off-target movement from June dicamba applications.

"It's far worse than past years," said Meaghan Anderson, a field agronomist for Iowa State University, based in central Iowa. "You can tell pretty quickly which soybean fields are not Xtend soybeans in my area, because they are all cupped and puckered up."

Regulators, farmers and scientists from other states, including Indiana, Illinois, Missouri, Minnesota and Arkansas told DTN that they are seeing off-target injury as well, although it remains too early to know how it will compare to past years.

"It's very easy to find injury," said Purdue University Extension weed scientist Bill Johnson. "But it's too early to know just how bad it's going to get."

The 2020 injury reports come amid a period of legal uncertainty for in-season dicamba use. Three registrations for over-the-top dicamba herbicides, XtendiMax (Bayer), Engenia (BASF) and FeXapan (Corteva) were vacated by a Ninth Circuit Court of Appeals' ruling on June 3. (Syngenta's Tavium was not named in the ruling). While EPA has issued a cancellation order permitting the use of existing stocks of these herbicides through July 31, their availability beyond 2020 remains a pressing question for the industry.

"I think there is a lot of movement and pressure within the industry to keep dicamba, but this season has not made me feel optimistic about our ability to use dicamba post-emergence in soybeans and be responsible and keep it where it's supposed to go," Anderson said.

Nearly all of Matt Foes' non-GMO soybeans in northwest Illinois this year are exhibiting the tell-tale puckering and cupping of dicamba exposure. But in a twist, he suspects only about 15% of his damaged fields were hit by dicamba coming off Xtend soybean fields.

"It was hot in late May and early June and very windy when people were putting out applications of dicamba on corn," he recalled. "And there are not the same label restrictions for dicamba in corn that there are for soybeans."

Dicamba applications in corn have increased due to herbicide-resistant weeds developing in the Midwest, Foes noted. And generic dicamba is increasingly a cheap option for farmers to add to a tank mix.

A similar situation unfolded in Iowa, said Paul Kassel, an Iowa State field agronomist based in northwest Iowa. A rapid planting rate across much of the Midwest resulted in many soybeans being fully emerged when early post-emergence corn applications went out, and corn and soybean dicamba applications overlapped more than is common in past years. Kassel and Anderson believe many sensitive soybean fields in their regions experienced two waves of off-target dicamba movement -- the first from early June corn applications in hot, windy conditions and then a later exposure from Xtend soybean applications in mid-to-late June.

"Some fields you can see some of the leaves start to look better, like they're growing out of it, and then the newer growth looks worse again," Anderson said.

"I've never quite seen it this bad," Kassel said. "This year, nearly every single conventional or Enlist E3 or LL GT27 soybean field is cupped up, east to west, north to south, fence to fence."

"It just comes down to the amount of dicamba being put out there in a limited timeframe," he told DTN. "We know the product continues to vaporize off of fields for days. And although the amount coming off a field drops off pretty quickly after 24 hours, if it is coming off 20 fields in an area, even those low levels will add up to a dose capable of causing injury to sensitive crops."

Another potential contributor to the widespread injury this year was the Ninth Circuit's June 3 decision to vacate three dicamba herbicides, which caused an initial panic among many farmers, who may have raced to get applications done under less-than-ideal environmental conditions, Hartzler said.

Many of the weed scientists and agronomists contacted by DTN said they have been battling misinformation on the likely source of cupped and puckered soybeans. Both Anderson and Purdue's Johnson said they have fielded inquiries over whether AMS, or ammonium sulfate, often causes puckered leaf symptoms. It does not, they clarified.

Johnson said he has also been disputing claims that Enlist (2,4-D) herbicides are causing 2,4-D-tolerant Enlist soybeans to pucker. "In 10 years of doing trials with Enlist, at least a half dozen trials a year, I can safely say we never saw that," he said.

Anderson also hopes to put to bed a recent myth surfacing that soybeans are experiencing a type of rapid growth that is causing cupped leaves. "There is no literature that I or anyone I know has found that documents a scenario wherein rapid growth causes cupping in soybean leaves," she clarified.

DICAMBA COMPLAINTS ROLLING IN, ALONG WITH 2,4-D

"There are symptoms of dicamba damage everywhere -- the most I have ever seen," noted Scott Wallis, who farms near Princeton, Indiana, in the southwest corner of the state and grows Enlist E3 soybeans. "Our soybeans are really short because of the cool start to the season this year, so for that reason, I have a little more concern for yield loss. Time will tell."

While most of Indiana's 51 alleged dicamba cases are farmers reporting neighboring farmers, many of the initial 100 herbicide injury complaints have involved homeowners, who are reporting injury to trees, gardens and ornamentals, Scott said. "We won't know the full impact of herbicide injury here until August," he predicted.

In Arkansas, where the state once again banned dicamba use after May 25, state regulators are already ahead of the pace of last year's dicamba case load.

The Arkansas State Plant Board has received 336 complaints, 106 of which allege dicamba injury, six that allege dicamba and/or 2,4-D and eight that allege 2,4-D injury alone, said Anna Thrash, public information manager for the Arkansas Department of Agriculture. Dan Scheiman, bird conservation director for Audubon Arkansas, is leading a volunteer network to monitor and report injury in the state for the second year in a row. So far, he has fielded 37 reports of dicamba symptomology, primarily in the east-central part of the state where his volunteers are concentrated.

Missouri state regulators are also fielding some 2,4-D injury reports alongside dicamba. "Missouri has logged 68 pesticide drift complaints this growing season," said Sami Jo Freeman, communications director for the Missouri Department of Agriculture "Of the 68 total complaints, 23 are alleged dicamba drift and five are alleged 2-4, D drift. So far, the alleged damage totals are 427 acres of soybeans from dicamba and 1,080 acres of cotton from 2,4-D. We also have some alleged drift damage to residential trees, gardens and flowers."

In an emailed statement to DTN, Bayer said most of the calls to its XtendiMax-reporting phone line are from Iowa but added that off-target complaints are down overall.

"We have received fewer calls so far this season compared to this same point in previous seasons," the statement said. "Currently, the majority of these calls are from Iowa."

"So far in 2020, BASF has only received two off-target incident reports for dicamba containing products," BASF told DTN in an emailed statement. "At this time last year, we had no such reports."

Iowa state regulators said they could not issue any numbers for dicamba injury reports yet, and Anderson said that the state's formal complaint numbers are unlikely to fully reflect the extent of injury on the landscape. Many farmers remain reluctant to report injury to the state and bring an investigation to their neighbor's door, she noted. But the reports are integral to helping officials understand the problem, she added.

"For documentation purposes, it's important that our department of agriculture, as well as EPA, have an understanding of the level of injury out there," Anderson said. "There is not really any other product sprayed in any conditions that I know of that is going to injure a bean field the way we see with [dicamba]."

See more on the injury being reported in Iowa from Hartzler here: https://crops.extension.iastate.edu/…

See more on the causes and symptoms of various type of herbicide injury from Anderson and Hartzler here: https://crops.extension.iastate.edu/… 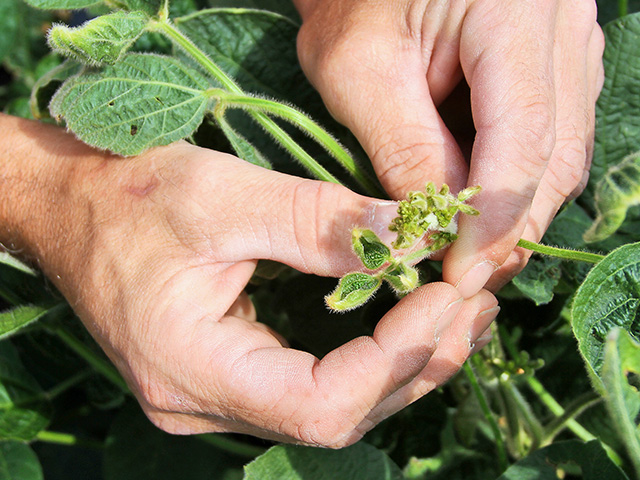