This past Friday the chief economist of the USDA released some tables for the February 2019 Agricultural Baseline Projections report.

These long-term agricultural projections are a consensus on a long-run representative scenario for the agricultural sector for the next decade.

A complete report is issued every year in February but in November, some selected tables are furnished.

Keep in mind the new crop figures often are far from reality and are released just for budget planning purposes.

Of interest to us is USDA's initial take on 2019 planted acreage of the major crops.

We feel that the USDA acreage changes projected for next year are predicated on falling soybean returns relative to corn and even wheat as the Chinese boycott of U.S. soybeans has decreased prices per bushel of that crop to a far greater degree than for corn or soybeans.

Some may view USDA's 92.0 million estimated 2019 corn acreage as rather light but given present projected prices for fall delivered crops in 2019 for many areas, prospective corn and soybean returns are both negative but corn loses less money than soybeans.

Keep in mind the 2018 Midwest row crop harvest has been late so fall tillage and fertilizer application needed for corn has not been done in many regions that could limit seedings of this crop next spring.

Over the past ten years, corn and soybeans have accounted for a greater percentage of the top eight crops planted in the U.S.

Their combined acreage next year isseen at 174.5 million which is 69.1% of the total estimated eight crop seedings, and though this is down from the 70.2% figure this year, it has advanced steadily since these two crops accounted for 55% of the total eight crop planted acreage back in 1996.

The Renewable Fuels Standard mandated gasoline in the U.S. contain at least a 10% ethanol blend, almost all of it produced from corn and the insatiable Chinese demand for soybeans for protein meal and vegetable oils to feed their expanding and increasingly richer populace are the main factors behind this trend.

Note that wheat acreage has fallen to decades low based on lower crop returns relative to other crops especially in the Plains that have seen wheat seedings decline in favor of increased corn and soybean seedings. 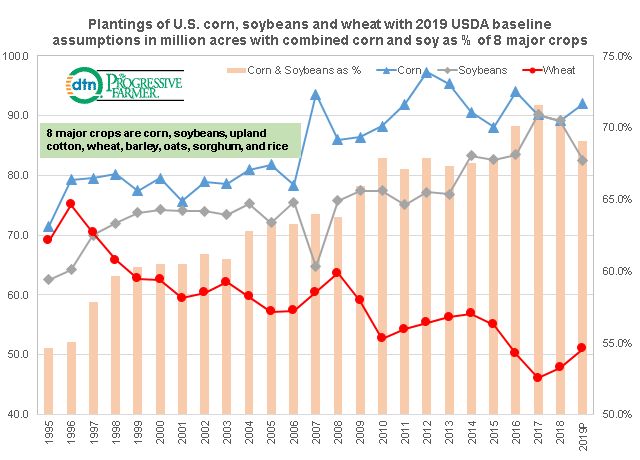