In a prior post we noted that if USDA increased its U.S. corn yield estimate from the August to September report and then lowered yields in the October report, there was a strong likelihood that yields would be revised downward again in the November report.

In this piece we look at USDA corn yield changes from September to October, October to November and then November to the January report in bushels per acre.

We pay particular attention to years such as this where the USDA lowered its U.S. corn yield estimate from the September to the October report and then again in November.

Those years are marked by an asterick down on the bottom of the x-axis showing all the years since 1980 through 2018, though we do not include 2013 where (due to a government budget impasse) USDA did not release a crop production report in October of 2013.

Interesting is the fact that the sample size is larger than our prior study numbering eight years since 1980 where the USDA lowered yields in both the October and November report, and other than the great flood year of 1983, all seven seasons since have seen the USDA lower corn yields a third consecutive time in the January report.

Just looking at those years since 1980 where the USDA lowered yields from the October to November report regardless of what was seen in the earlier reports, there were 12 instances of that and 8 times the USDA again lowered yields in the Janaury report.

Given the delayed harvest and increasing reports of some quality issues due to excess precipitation, this adds further support to ideas that the USDA will again lower the 2018 national corn yield in the annual crop production report scheduled for release January 11, 2019. 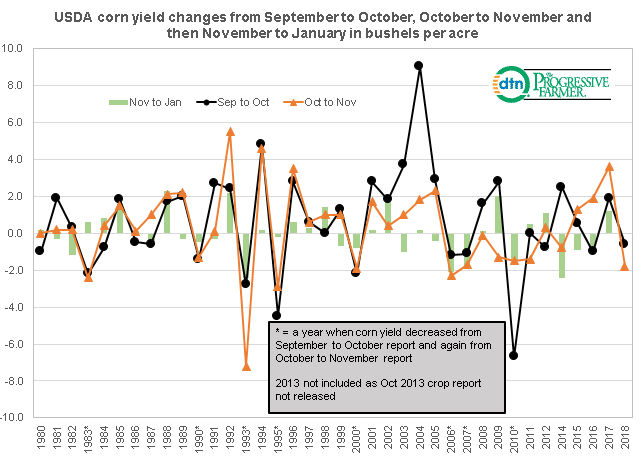