Plantings of the 2019 U.S. winter wheat crop have been lagging based on wet weather in the Plains that has delayed seedings for the hard red winter crop, but also in the southern Midwest where October rains have corn and soybean harvesting rather slowly.

In turn, this has limited plantings of the soft red winter wheat crop in that region of the country.

With this precipitation it had been expected that the first winter wheat condition report of the fall would show this year's initial crop condition above average but that was not the case.

Using our usual ratings system (where we weight the crop based on the percent in each category and assign that category a factor of 2 for very poor, 4 for poor, 6 for fair, 8 for good, and 10 for excellent and then sum the results) USDA this week put the 2019 winter wheat first crop rating at 688 which is below the year ago 690 and also down from the five, ten and thirty-year average of 708, 700 and 715 respectively.

As we have noted in the past, the correlation between the first crop rating of the year and the percent that the USDA's May winter wheat yield projection (the first one of the season) deviates from the 30 year trend is quite low.

In fact the correlation between the initial crop ratings and the percent the May yield deviates from trend for the five, ten and thirty-year periods are respectively -54.6%, 29.7% and 17.8%.

Statistics and agronomist opinions indicate that it is weather in the spring, especially going into the critical heading period, that is most influential for yields with the first spring rating having a much higher correlation to percent yield deviations from trend than the first fall rating. 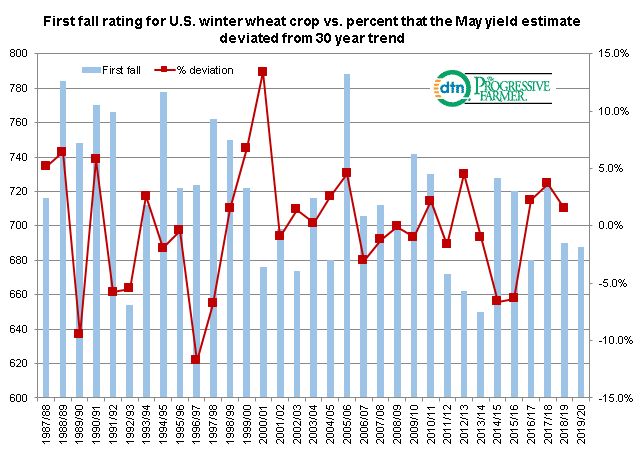