This should have been no surprise as soybean processing firms have been making tons of money crushing soybeans with some of the highest margins of all time.

This graphic shows the weekly central Illinois soybean crush margins in dollars per bushel along with the long-term average and the plus and minus one and two standard deviation lines.

Note that soybeans are processed into two products -- soybean meal and soybean oil, and this process is known as "crushing."

It is a measurement of the profit margin for the soybean processor with each 60-pound bushel of soybeans producing approximately 11 pounds of oil, 48 pounds of 44% protein meal and 1 pound of waste.

Processor profits are enhanced when the combined value of the products increases relative to the cost of soybeans and vice-versa.

Crush margins, which have been buoyant for most of the year, have really taken off over the past two months as China's boycott of the U.S. soybean market in response to actual and threatened tariffs on up to $500 billion in Chinese goods by the Trump administration has caused soybeans to fall much more on a percentage basis than either soybean meal or soybean oil.

Movement in soybeans and the products since the end of May has added 53 cents to the crush margin.

This means that the current $2.64 per bushel margin has been seen less than 2 ½% of the time over the past 25 years suggesting these elevated margins may start to contract especially if there is any resolution to the current trade impasse between Washington and Beijing. 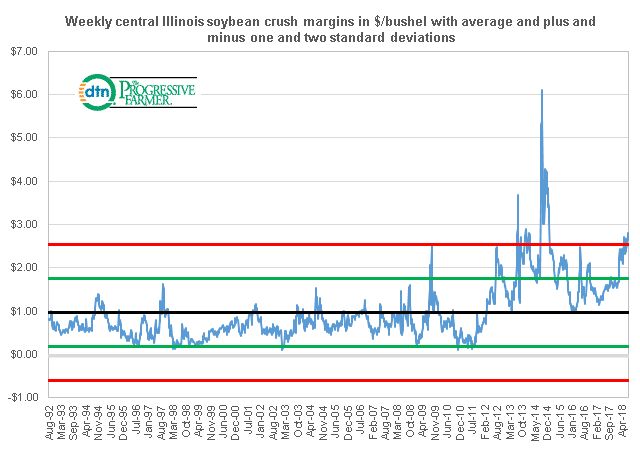