Earlier this week the USDA put the percent of the U.S. corn crop silking as of July 15th at 63% which is exceptionally fast and to some suggests that above average temperatures for most of the growing season in large sections of the Corn Belt may be accelerating corn crop maturity at the expense of test weight and yield.

This graphic shows the percent of the corn crop silking as of July 15th going back to 1986 when the first national corn crop ratings started.

Also reported is the crop condition as of July 15th using our usual ratings system where we weight the crop based on the percent in each category and assign that category a factor of 2 for very poor, 4 for poor, 6 for fair, 8 for good, and 10 for excellent and then sum the results.

Finally in the green boxes is the percent that final corn yields that year deviated from the 30-year trend.

This year's 63% silking rate is the second fastest ever next to the 71% pace in 2012 when one of the nation's worst droughts torched the crop and sped it towards maturity with final yields that season 22.7% below trend.

The only other time the rate of silking was this advanced was in 1987 with 58% though crop ratings were the second highest ever as of July 15th at 829 with final yields that season 10.1% above trend.

Despite this year's lofty crop ratings some feel that the top end of yields is being reduced by high night-time temperatures with university studies showing that such elevated readings during grain fill can reduce kernel weight by increasing the rate of respiration that increases the demand for sugar for energy hence diminishing its availability for kernel growth or grain fill.

As an aside a regression using both July 15th crop ratings and percent silking explains about 72% of the variability in corn yields and projects the final yield 2.0% above trend (171.6 bpa) implying final yield of 175.0 bpa which is probably a little lower than what we feel the market is trading. 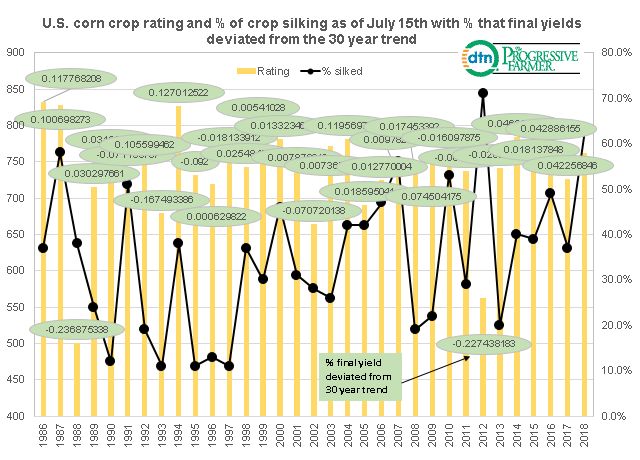