In a prior post we noted that despite a decline in output among some key producers, on the surface the wheat situation does not look especially bullish.

Even with the drop in global stockpiles, the world wheat stocks-to-use ratio at 35.0% appears to the second highest in at least 30 years next to the year ago 36.9%.

Another way to look at the world wheat situation was to look at the available supplies in the major exporting countries which includes Argentina, Australia, Canada, the European Union, Russia, Ukraine and the U.S.

Using this measurement, the stocks-to-use ratio of the major exporters comes in this year at 22.3% which is well below the 2017/18 mark of 28.4% and is the lowest since 21.3% was seen in the 2012/13 season when wheat futures ran to their second highest levels of all time.

The story of this little exercise is that a relatively high world wheat stocks-to-use ratio belies what is an increasingly bullish wheat situation as recent market action would attest, while the lowest global corn stocks-to-use ratio may not be as friendly as that number would suggest. 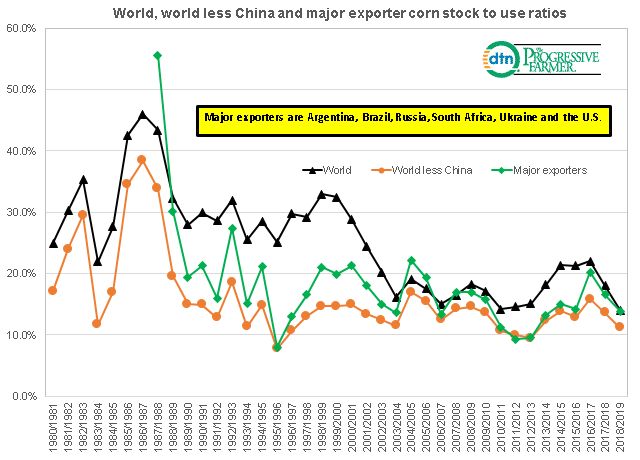