In a prior post we had noted that while there is keen interest in the pace of corn plantings and its impact on final yields, we noted that summer weather has a greater influence in this regard than planting dates.

There is a however a relation between planting date and the change in U.S. corn acreage from the March prospective plantings numbers to the final acreage figures contained in the annual crop production report released in January.

The price of corn is also an important factor in determining whether farmers stick with their original intentions or perhaps switch crops if the calendar dictates that such a move may be necessary.

This chart shows the change in the U.S. corn planted area from the March intentions to the final crop report in 1000 acres vs. the percent of the crop planted by May 5th where the ten year average is a 45% planted rate.

Highlighted in yellow is the November soybean/December corn ratio as of May 1st.

The slowest planting pace seen in recent years was in 2013 when a mere 12% was in the ground as of May 5th and even though the May 1st SX2013/CZ2013 ratio was a rather low 2.20 at the time (which favors planting corn over soybeans which is the next alternative crop most Midwest farmers would plant if they cannot get their corn crop in the ground on a timely basis), final 2013 corn acreage fell a sharp 1.917 million acres as reported in the final crop production report.

The flip side is if speedy plantings result in higher final acreage than what farmers indicated back in March.

It appears that farmers are more willing to stick with corn even if plantings are late if the economics favor planting corn over soybeans while in years of fast corn plantings where one may think that this could result in extra corn being planted, attractive soybean prices vis-a-vis those of corn can prompt producers to switch crops. 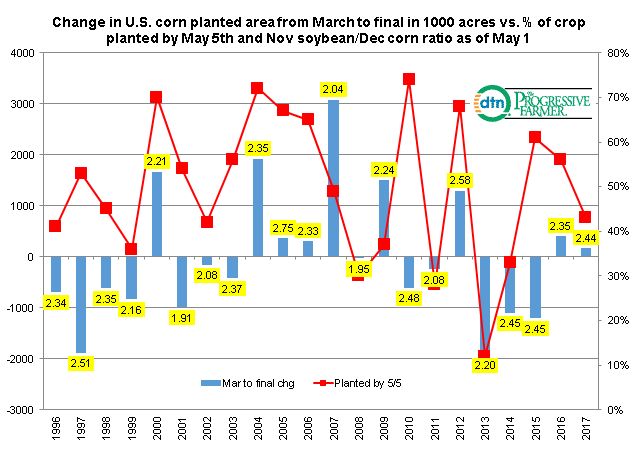