It is quite apparent that U.S. corn plantings will not get off to an earlier than normal start and even an average pace of corn seedings looks unlikely.

Much of the Corn Belt is experiencing an extended winter even into mid-April with a number of Upper Midwest states seeing a major blizzard this past weekend with soil temperatures as much as 20 degrees below the 50-degree threshold needed to germinate corn seed.

Unfortunately the forecast for the rest of the month features below normal temperatures for much of the Midwest, though rainfall is seen rather light.

Keep in mind that with today's modern equipment farmers can and have seeded anywhere from 40-50% of intended acreage in one week.

We also show the trend of these planting levels and the percent that each specific year's final corn yield deviated from the 1986-2017 trend given the idea that speedy corn plantings can improve the odds of trend or higher yields.

With April having 30 days, this corresponds to the dates of April 27th, May 8th and May 16th.

It is true that late corn plantings can have a depressing impact on final yields due to the key pollination phase pushed back into hotter part of summer and the possibility of an early frost.

But work we have done suggests summer weather is much more important in determination of final yields and in that regard many in trade feel recent heavy precipitation in Corn Belt very good for recharging subsoil moisture levels.

A final point is the trend for the 25, 50 and 75% level show each mark being attained earlier in the year than seen in the past.

Previous Post (Corn Stocks/Trade Guess vs. Changes in Feed Demand)
Next Post (Percent of Corn Planted by May 5th ) 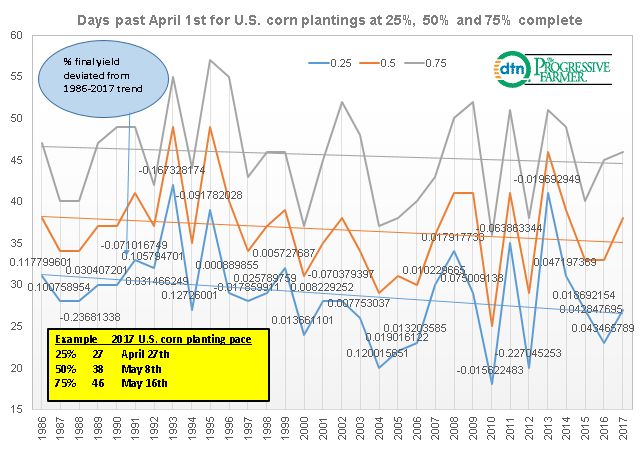