In prior posts we noted that late corn plantings did not have an appreciable impact on how final corn yields deviated from trend.

A much closer relation was observed between planting dates and change in corn acreage from the March prospective plantings report to the final crop production figures, especially if the November soybean-December corn ratio as of May 1 was in favor of soybeans.

In this piece we look at the change in U.S. soybean acreage from the March prospective plantings report to the final crop production figures given in January in 1000 acres.

Though we had made mention that the relation between when 50% and 75% of the corn crop is planted vs. the percent deviation from final yields was rather loose, it is clearer that corn put in the ground after May 15th does lose yield potential.

This again is based on corn having to pollinate in mid- to late July when it is hotter, as opposed to the beginning of July, a higher risk of late planted corn not being mature by the time the first killing freeze arrives in autumn, and the fact that some producers mindful of the calendar may have switched to shorter-season, lower yielding hybrids.

Looking at years when corn plantings by 5/15 are behind average we see that in 2014, only 67% was seeded and bean acreage did increase by a sharp 1.783 mln acres from the intentions report though the SX/CZ ratio was a phenomenally high 2.69, giving producers every reason to shift.

The year earlier in 2013 corn plantings were seriously behind at only 46% complete yet bean acreage actually fell by 0.286 mln since soybean seedings that year were also delayed with only 55% in the ground by June 1st.

It does appear that of corn is not in the ground by May 15th then the likelihood of switching to soybeans is much greater even if the economics favor corn plantings.

Previous Post (Percent of Corn Planted by May 5th )
Next Post (Change in USDA Ending Stocks Est. for Top Crops ) 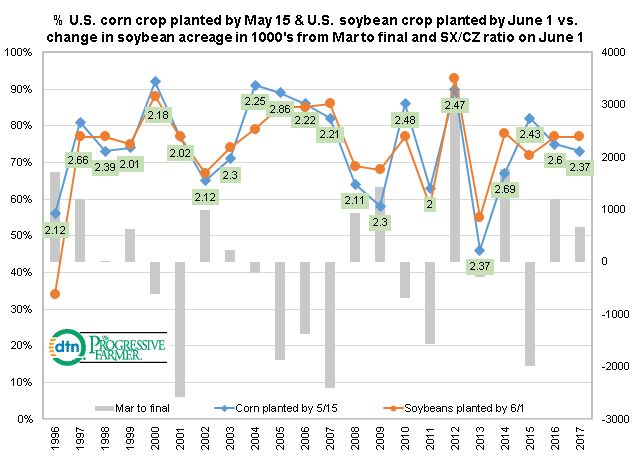