Even though the market focused more on the bullish corn planting intentions figure of 88.0 million acres vs. the more negative higher than expected March corn stocks in all positions (SIAP) report when they were both released on March 29th, the stocks figure on the surface looks rather bearish as it offsets some of the lower planted figure number and implies far less corn fed than had been anticipated.

This graphic showsUSDA quarterly stocks figure in March minus the average trade guess compared to the changeUSDA makes in its corn ending stock figure from the March to the April world agricultural supply-demand estimate (WASDE).

These differences are then compared to the change in the feed/residual category from that April WASDE report to the final figure all in million bushels.

Since the two other components of corn demand, food-seed-industrial (FSI) and exports have data that is released on a weekly or monthly data the only unknown is feed usage, a number that is backed out of the stocks figure.

Hence the higher than expected 3/1/18 corn stocks implies corn feed use in the Nov 2017-Feb 2018 quarter must have been far lower than anticipated and perhaps also the 2017 U.S. corn crop may be higher than the January estimate of 14.604 billion bushels.

Interesting then thatUSDA only increased this year's ending stocks by 55 million bushels paring FSI usage by 5 million and feed/residual by 50 million.

How does one then reconcile the differences between the two? Was the 12/1/17 stocks figure at 12.567 billion bushels accurate or the Sep-Nov 2017 feed/ residual estimate actually 2.248 billion.

Often the culprit is feed demand so in that regard we looked at the change in feed demand from the April to the final figure to see if that would account for discrepancies in the March 1 stock stocks estimate.

It does appear that revisions in feed demand explain some but not all of the differences betweenUSDA stock estimates and trade guesses.

We did look at revisions in corn production but the only large change was in 2013 with that crop revised down by 96 million bushels the following year.

Most corn production changes over the past 15 years have been negligible. 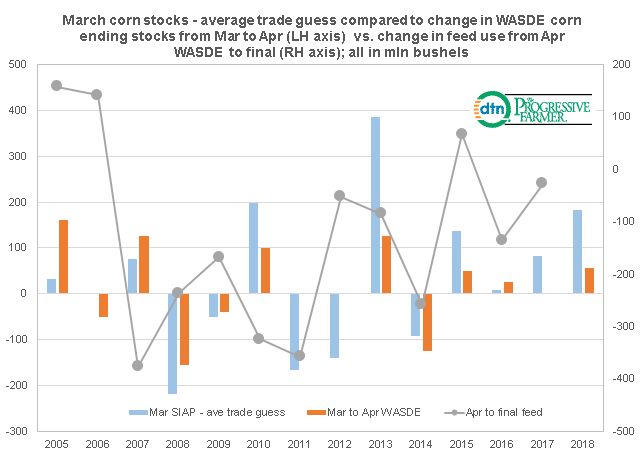