While soybean meal has been the star performer of the CME grain and oilseeds complex, rallying over $70 per ton on massive fund buying along with enhanced export prospects for U.S. shippers in light of the deteriorating Argentine soybean crop, the other processed soybean product soybean oil has not fared as well.

At a time when soybean meal futures has moved to new contract and 18 month highs, soybean oil has taken the opposite tack, moving to its lowest level for the March 2018 contract since July 2016.

It might seem strange that soybean meal is being supported by the Argentine drought but not soybean oil even though Argentina is the largest exporter of both products.

Furthermore, the economic fortunes of soybean oil were dealt a blow when Congress just approved a dollar per gallon biodiesel blenders credit for 2017 but not for 2018.

This graphic shows the percent contribution of soybean meal to the combined crush value of soymeal and bean oil basis central Illinois along with the long-term average percent and the plus and minus one and two standard deviation lines.

Hence the current 71% of the crush value is even above the two standard deviation lines which has only happened 2.5% of the time since August 1992 though occurrences of such a high percent have been more frequent in recent years. 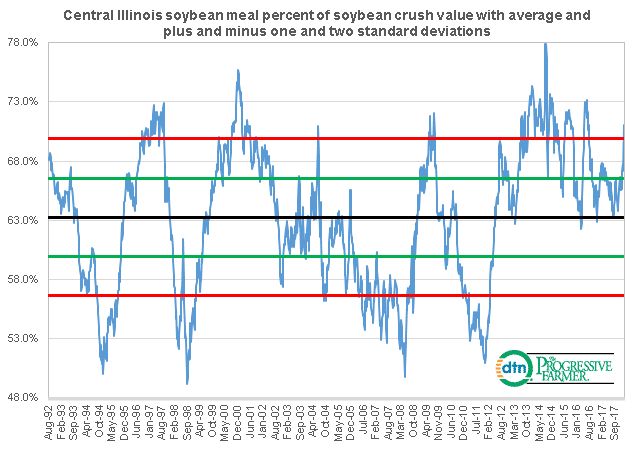