Since the slew of USDA reports were released on January 12th, the soybean meal market has been on a real tear rallying over $70 per ton in the ensuing five weeks to the highest levels in 18 months and in the process lifted values for cash soybean meal, canola meal and a variety of other protein meals in addition to hiking DDG prices.

Behind this surge has been a worsening drought in Argentina that could pare that country's corn and soybean production by large margins.

Keep in mind that Argentina is the world's largest exporter of processed soybean products specifically soybean meal and soybean oil and as this country is responsible for about 50% of all soybean processed products traded on the world market.

As reported two weeks ago, the USDA has pared its estimate of Argentine soybean production to 54 million metric tons vs 57.80 million a year ago though most estimates now are for output to fall below 50 million tonnes with some extreme projections of production closer to 45 million.

The likelihood of lower Argentine soybean meal exports has enhanced the export prospects for U.S. product which has resulted not only in rising board prices but cash soybean meal values have also escalated.

Though corn prices have also rallied, the advance in soybean meal has been much higher and in the process brought the CME soybean meal/corn futures ratio on a dollar per ton basis to its highest level since August 2016.

This chart shows the ratio along with the average and plus and minus one and two standard deviation lines.

With the price already above the plus one standard deviation line this means that the ratio is trading in an area that has only been exceeded 16% of the time since January 2000 and if values get close to the upper red line at 3.06 this means the ratio is in lofty territory that has only been breached less than 2.5% of the time over the past 18 years.

The point is soybean meal is very expensvie vis-à-vis corn, a point not lost on nutritionists as they may start to incorporate more corn in the feed rations for its protein content in addition to its energy component. 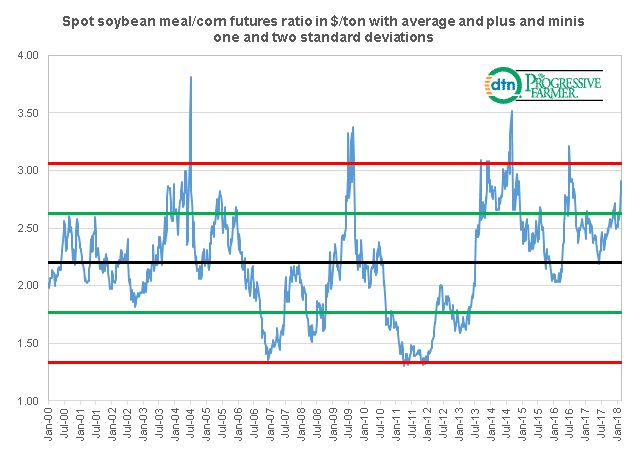