The USDA recently released their first balance sheets for the major crops for the 2018/19 marketing year at their annual Agricultural Outlook Forum as large carry in supplies along with more than adequate production forecast for the coming year keeps prospective ending stocks at more than adequate levels.

Of course a number of factors can result in the final ending stocks figures being radically different than what the USDA forecasts 18 months earlier based on weather altering production estimates and foreign supplies, changing macroeconomic conditions that influence demand and revisions to the beginning stock numbers that are also used in these calculations.

The 20 year average shows that the USDA tends to understate wheat stocks by 1.1% and overstate the corn carryout figure by 5.8% as these deviations do not look to bad.

For soybeans however, since the 1998/99 season the USDA has tended to overstate final soybean stocks by a large 56.2% as this year's apparent understatement of the final 2017/18 stocks is an exception.

For the past five years and in nine of the past ten years the USDA has overstated final soybean ending stocks, often by large margins.

While differences in crop size are often the reason, corn is subject to the same conditions yet the deviation between the USDA's initial projection of final ending corn stocks and where they actually come in are not nearly as large.

The culprit appears to be the USDA underestimating foreign demand for U.S. soybeans particularly from China.

Given the ongoing tensions between Beijing and Washington over a number of trade issues this may not be the case this year. 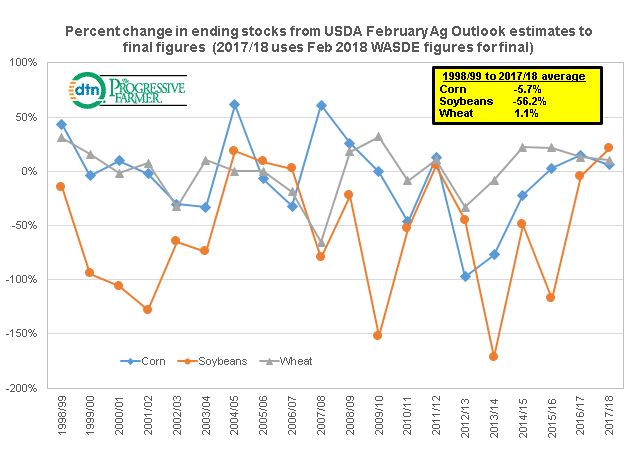