Continuing our discussion of crop yields this past growing season vs. key variables, in this post we look at the percent that 2017 yields as measured by the November crop production report for the top 18 corn growing states deviated from their respective 30 year averages.

For crop ratings, we use our usual system where we weight the crop based on the percent in each category and assign that category a factor of 2 for very poor, 4 for poor, 6 for fair, 8 for good, and 10 for excellent and then sum the results.

The U.S. set a new national corn yield record at 175.4 bushels per acre (bpa) and as expected most of the top states did quite well with yields in KY, MO, NC, PA, TN and TX all at least 13% above trend.

In fact, the only states that did not have above trend yields were those in the drought stricken Plains including NE, ND and SD.

There has been a lot of talk about the disconnect between crop conditions and yields this year for in a season in which a record U.S. corn yield was established this should have come when national crop ratings were especially high but that was not the case in 2017.

Of all the states, perhaps the biggest surprise was Illinois where an outstanding yield of 198 bpa, the second highest ever, was achieved with average crop ratings, the just mentioned 27.1% shortfall vs. normal summer rainfall and a Palmer Drought Severity Index of -1.37; one of only two states that showed drought conditions as of the end of September with North Dakota's even more severe -2.32 end of Sep PDSI rating the other. 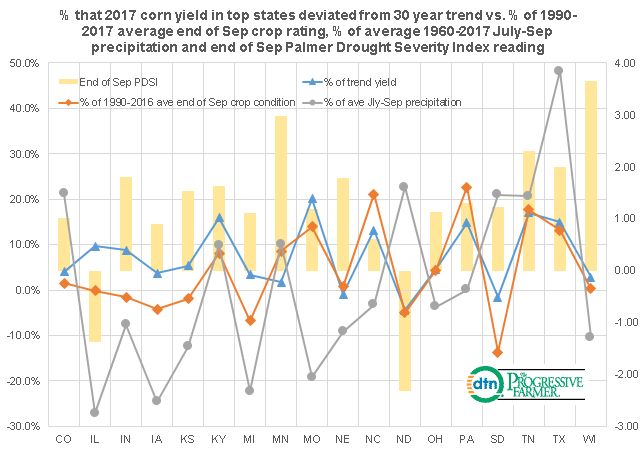