This was achieved despite less than stellar growing conditions.

Certainly helping was ample subsoil moisture levels at the beginning of the year and for much of the summer below average temperatures that helped conserve soil moisture and alleviate any moisture stress on the corn and soybean plants.

Still, based on the low weekly crop ratings relative to other high yielding seasons, especially the most recent in 2016 there is a lot of head scratching as to how these yields were achieved.

This year's Iowa corn yield as indicated in the November crop report was 197 bushels per acre (bpa), the second highest ever next to the year ago 203 bpa.

Turning to the weather variables, this year's average July-September temperature for Iowa was 69.7 degrees, 0.5 above the 69.2 average which is below the year ago 70.7 reading and actually the second lowest since 2009 with the 67.3 reading in 2014 the only one lower in recent seasons.

Putting all of this together it appears that Iowa weather in the July-September period featured average temperatures and slightly below average precipitation.

All these years had temperatures less than one degree above average so there have been times in the past when similar weather conditions have resulted in above trend corn yields for Iowa. 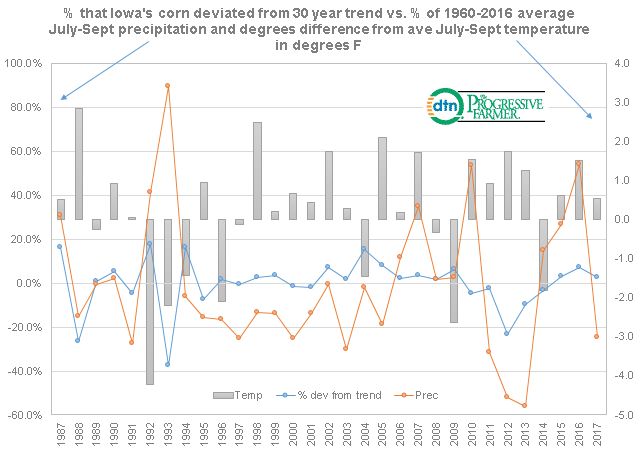