Reports indicate that the 5th round of NAFTA negotiations did not go well.

U.S. requests for action against the Canadian dairy system and the ability to sue Mexican produce growers casts the whole situation in a very poor light with U.S. Chamber of Commerce saying the fall of NAFTA will really hurt U.S. agriculture and Upper Midwest states that gave Trump his victory a year ago.

Along these lines there continues to be concern that the USDA is too optimistic about the export prospects for U.S. corn and soybeans this season.

This graphic shows U.S. soybean export sales and shipments as of the third week in November in million bushels and as a percent of the November USDA WASDE export projections with the soybean figure being maintained at a record 2.250 billion bushels.

Despite consistently understating final demand for U.S. soybeans, often due to a lower export projection than ultimately is seen, this year USDA may have too high an export projection and hence ending stocks estimate.

The current sales of 1.229 billion bushels is 54.6% of the WASDE projection which is not only far behind the ten year average of 71.7% but the lowest sales pace as of the third week of November as a percent of the November WASDE export projection since the 2006-07 season and the third lowest since the 2000/01 season.

It would seem soybeans more than corn has a good chance of seeing a lower export projection in subsequent WASDE reports especially if forecasts for another year of bumper South American soybean production comes true. 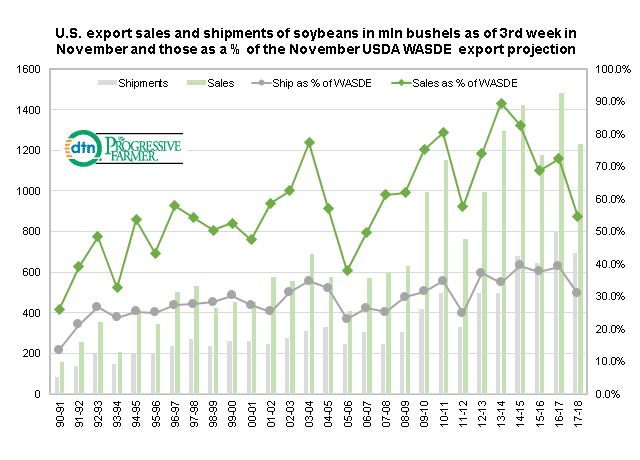