Last week the USDA in its first projection of the U.S. spring wheat crop pegged the yield at 40.3 bushels per acre (bpa).

Given the ongoing drought in the states of North Dakota, South Dakota and Montana where the bulk of this crop is grown additional yield declines are expected in both the August and September crop production reports.

Note that the first USDA yield estimate for spring wheat comes in July, one month prior to the first USDA field survey based production reports for both corn and soybeans.

We were curious if the spring wheat yield estimate could give any insights as to what yields would be when the USDA releases its first field survey based production report for corn and soybeans in the August report.

One reason is that each crop is grown in different areas with corn and soybeans to some extent seeing output come primarily from the Midwest while spring wheat production is centered in the Northern Plains.

The critical month for spring wheat appears to be June, whereas it is July for corn and August for soybeans. Since 1990 there have been four seasons where the July spring wheat yield estimate was 10% below trend starting in 1997 at off 13.8% yet the August corn and bean projections were 3.3% below trend and 5.4% above trend respectively. 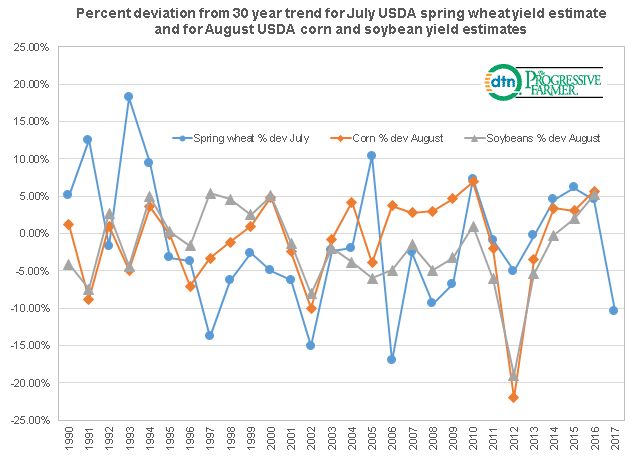