The June weather data is in from the National Oceanic and Atmospheric Administration (NOAA) and it appears that July will start off with similar moisture conditions seen the prior month with precipitation limited in areas of the Plains and Western Corn Belt with the Eastern Corn Belt and Delta seeing more ample rainfall.

Nebraska is another state under the gun and no surprise with June rainfall a mere 1.44 inches which is just 39% of their average as last month was the driest June ever from 1950 and the second driest ever going back to 1895.

Other states that had well below normal June rainfall included Colorado at 49%, Iowa at 71% and Illinois at 72%.

On the other hand, more northern and eastern states had ample moisture including Michigan and Wisconsin at 138% of their average.

With the latest forecasts calling for above normal temperatures this heat will exacerbate the dry soil conditions for corn which this month goes through its critical pollination phase when water requirements are the highest. 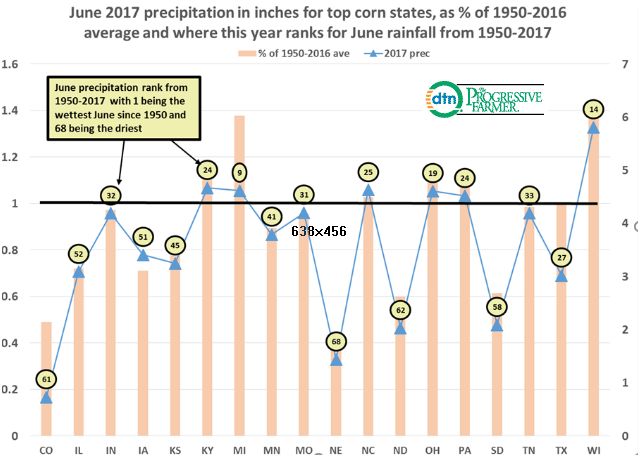 Bryce Anderson
7/13/2017 | 5:42 AM CDT
Minnesota defines the rain divide in the Corn Belt this year very well. As noted--western Minnesota has been very dry whereas central and eastern Minnesota have caught some heavy rain recently.
Brad Miller
7/12/2017 | 11:14 AM CDT
absolutely no rain in Porter, Mn!!!