In a prior post, we noted that national corn crop conditions as of week 28, around the middle of July, are the worst since 2012 and the sixth worst since national crop ratings were introduced in 1986.

The national average masks which states are faring better than others though weather has been far more adverse in the Plains and Western Corn Belt as opposed to the Eastern Corn Belt, Delta and Southeast.

In this piece we look at the individual 18 states that make up the national rating using our usual ratings system (where we weight the crop based on the percent in each category and assign that category a factor of 2 for very poor, 4 for poor, 6 for fair, 8 for good, and 10 for excellent and then sum the results).

First off, we note that there are seven states with week 28 conditions this year lower than the 30 year average, eight states that are above average and three that have conditions about equal to year ago levels.

Note that as of week 28 both Pennsylvania and Tennessee have their best conditions ever with North Carolina also doing exceptionally well, reflective of the milder conditions seen out east.

On the other hand, South Dakota has their worst rated crop ever with Colorado, Nebraska, and Kansas all struggling with Indiana's rating also low though that is attributable to actually excess precipitation so far this growing season.

The two biggest producing states Iowa and Illinois have ratings equal to the 1986-2016 average though there is fear that this week's continued sparse rainfall and elevated temperatures will cause crop conditions to deteriorate rather rapidly over the next few weeks. 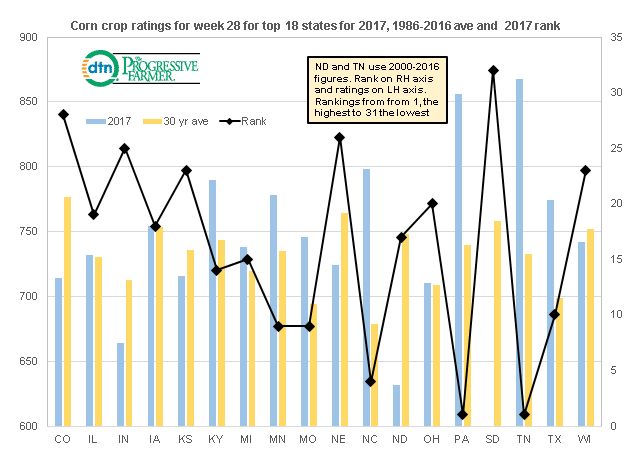