This is based on a 0.50 million acre reduction in planted area, a 0.10 million decline in harvested acreage and most importantly a 0.7 bushel per acre (bpa) cut in the estimated yield.

Final production and yields however at 15.148 billion bushels and 174.6 bpa are still both records topping the prior highs set in 2014.

The graphic shows the final 2016 corn yield, the estimated 2017 trend yield and the 2016 yield as a percent of both the 2015 yield and trend with yields in bushels per acre and the trend spanning 25 years for the top 18 producing states and the U.S.

As is often the case, Iowa the largest producing state had the highest yield at 203.0 bpa, one of five states that saw all-time high record corn yields this past season including ND, SD, MN and WI as the Upper Midwest was the star performer this year.

Pennsylvania's yield at 129 was actually the worst in terms of percent of trend at 88% as this state along with much of the Northeast remains mired in fairly serious drought and at 90% of the 2015 yield was also the lowest in that regard.

As for 2017, weather will dictate what happens there though with talk that large tracts of land may move from corn to soybean seedings this could have an upward boost on the national yield estimated by the 25-year trend at 168.1 bpa if farmers switch some of their less productive land to soybeans. 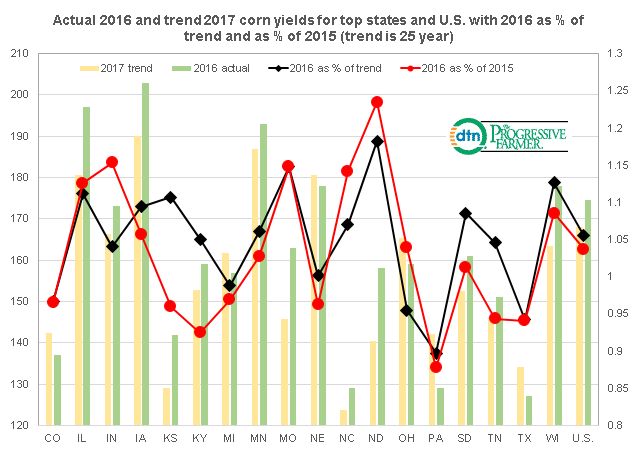