There has been a lot of attention focused on the new crop 2017 November soybean/December corn ratio which at the beginning of December stood at a very lofty 2.70 which is well above the average ratio of 2.35.

A high soybean-corn ratio often signals to market participants including farmers and traders the need to plant soybeans as opposed to corn to take advantage of this high ratio.

The attached graphic shows the new crop November soybean/December corn ratio at the beginning of January at the start of the new calendar year and at the end of March right ahead of the release of the USDA's prospective plantings report.

Similar to what we have seen in years past when the ratio is rather high is over the ensuring three months the ratio comes down as the trade figures that the lofty number will result in an increase in soybean planting intentions from the final planted soybean figure the year prior and a drop in intended corn acreage from the prior season.

In 2005 the ratio at the beginning of the year was 2.57 and fell to a still high 2.47 by the end of March year bean planting intentions were down 1.7% from the year prior and corn plantings even.

The other year of a relatively high bean-corn ratio at the start of the year was in 2014 at 2.54 falling to 2.44 by the end of March resulting in soybean acreage up 6.4% and corn planted area intentions down 3.9%.

With the current ratio at 2.62, the highest in more than 20 years, early thoughts are for soybean acreage to increase 5-6 million and corn plantings down 3-4 million though these are tentative for now. 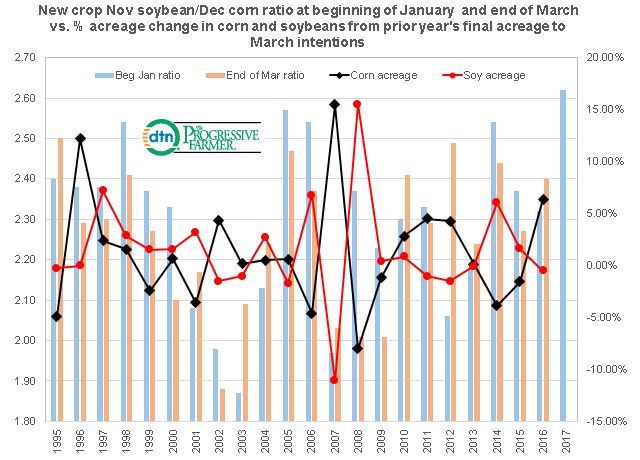