The USDA hiked its estimate of the 2016/17 Brazilian soybean crop by one million metric tons to 102.0 million, which is a record in the October world agricultural supply-demand estimate (WASDE) report based on its projection of larger planted and harvested acreage.

No additional changes are anticipated in the November WASDE as it is still early in the growing season with the crop still being planted.

As noted, harvested acreage at 33.80 million hectares is a new record and is more than double what was seen 15 years ago.

Given the estimated production and harvested acreage figure, this works out to an estimated yield of 3.018 metric tons per hectare.

This chart shows Brazilian soybean yields in metric tons per hectare since 1975 along with the percent that each year's yield deviated from the 40-year trend.

Based on these observations, this year's projected yield appears to be 2.6% below the projected trend yield for this year at 3.0993 mt/ha.

This graphic shows that for the most part the deviation of Brazilian soybean yields from trend has been pretty tame with the last time yields were 10% or more above trend back in the 2002/03 season with yields 10% or more below trend occurring in the 2004/05 season.

With plantings proceeding well and moisture conditions more than adequate the USDA may at some point choose to boost their estimate of Brazilian soybean yields this year to at least trend which could result in a crop of 104.75 million metric tons. 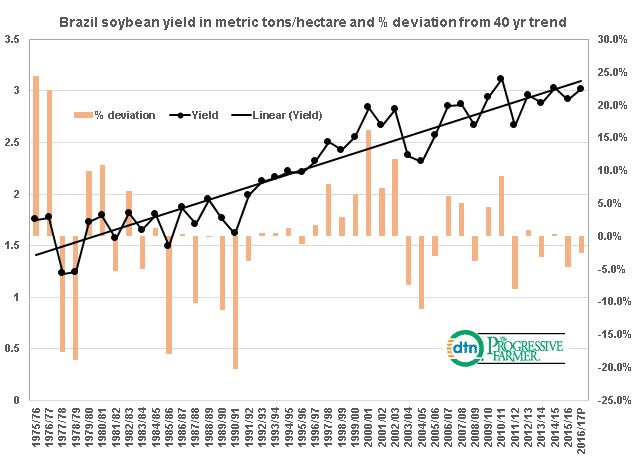