Prospective 2017 net acre per return budgets, the sparkling soybean yield performance seen over the past three years and banker conversations seem to suggest increased U.S. soybean acreage next spring with a commensurate decline in corn seedings.

The attached graphic shows the November soybean/December corn ratio the day before Thanksgiving vs. the percent change in both corn and soybean acreage from the final acreage figures to the following planting intention figures furnished by the USDA at the end of March.

The ten-year average is a ratio of 2.37 so it is thought that a ratio higher than this will encourage increased soybean acreage while a ratio below this level should favor higher corn plantings.

Actually the 30-year average for the new crop soybean-corn ratio the day before Thanksgiving is 2.51 but there is a long time from the end of November to early spring before farmers finalize their planting decisions.

Also the absolute level of prices and expectations about where prices may go during the growing season influence the mix of planted acreage.

For instance, a relatively low 1.93 ratio the day before Thanksgiving in 2011 led to a 4.3% increase in corn acreage as seen in the March 2012 planting intentions from the final 2011 corn acreage figure with bean acreage falling by 1.5%.

The following year the ratio was even lower at 1.73 which should have strongly encouraged more corn seedings but both the March 2013 corn and soybean planting intentions were unchanged from the final 2012 figures.

The current high ratio is yet another indicator that soybean seedings should increase and corn acreage fall when the 2017 March planting intentions report is released next spring. 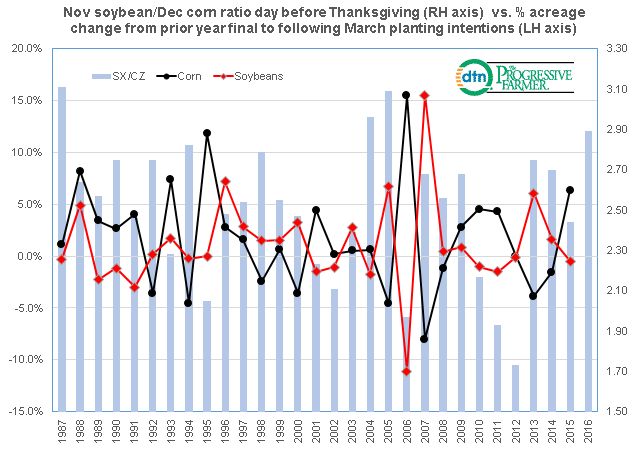