As noted in a prior piece, 2016 was a banner year for U.S. soybean production as the November yield estimate of 52.5 bushels per acre (bpa) was not only a record in terms of quantity, but at 15.4% above trend was tops in that category also as all 18 top states saw yields over their respective trends with 13 having all-time highs.

This graphic suggests that the record soybean yield this season was based on the highest number of pods within an 18 square foot area ever which we calculate at 1,861 pods and the second highest implied weight ever next to 2010 at 0.3275 grams per pod.

It is interesting that the trend yield for corn has on average increased by 1.8 bpa per year based mostly on the increased number of ears per acre seen over the years as the weight of each ear is determined primarily by weather conditions.

For soybeans, the chart shows the number of pods per 18 square foot area trending lower over the past 12 seasons yet the weight of each pod increasing according to the attached trend-line.

In a stressed-filled year such as the 2012 drought, it appears that adverse weather conditions result in a lower number of pods but the pant tries to compensate for this by having larger weighted pods which appears to be the opposite of corn. 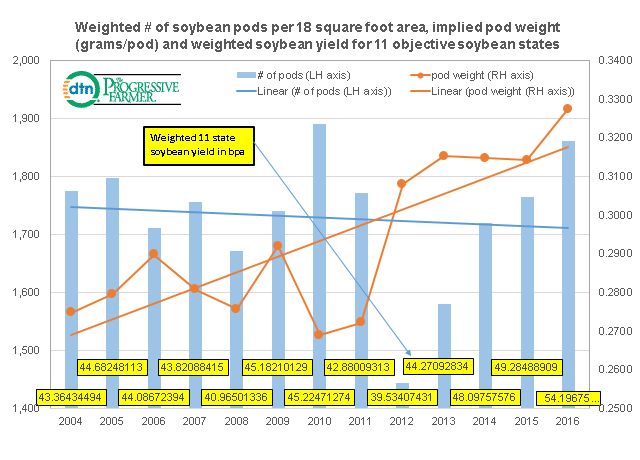