USDA confirmed that generally favorable summer weather resulting in some of the highest U.S. corn crop ratings as of the end of August ever would lead to a record high national yield.

This graphic shows the September USDA corn yield estimates for the top 18 producing states and the U.S. in bushels per acre, the percent of the 1989-2015 trend and at the bottom where this year's yield ranks in the period 1989-2016.

Finally, as one would expect, when the national yield is a record is that a number of top producing states also had their best all-time yields with five including Il, IN, KY, ND and WI seeing their best yields ever and another four including IN, MN, NE and NC seeing their second highest corn yields ever.

There are just five states; CO, MI, OH, PA and SD having below trend yields.

We should note that in other years where the U.S set a new all-time high yield even more states had their best years ever including nine in 2014, twelve in 2009 and thirteen in 2004. 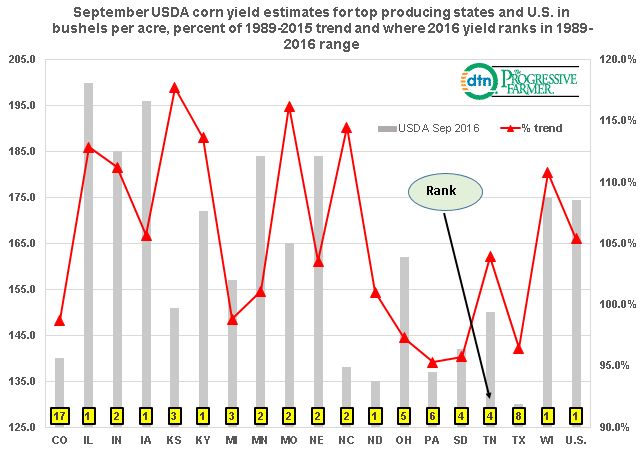